It can be fun to find unusual things at Home Depot.  Just last week (early October) they were setting up their Christmas Decorations.  I should have taken a picture, but I think I did the same thing last year and do not suppose anyone would find this odd.  Plus, I don’t want to be seen taking random pictures in retail stores.  That’s creepy.

Even without a photo, I must have done something wrong because I kept getting strange looks.  I worried my pants might be unzipped or I was wearing a funny hat.  Every so often employee would come up to me and in a slow deliberate tone ask me if I needed help.  A little bit like I was a lost 8 year old.

After my weird shopping experience (light bulbs) I headed over to Luna Grill for lunch.  I love that place.

After I ordered, the cashier looked me in the eye and said “Why so fancy?”

Um, what was she referring to?  I froze then looked to the ground self-consciously and noticed I was wearing a tie.  You know, the ones from old-time movies.  Back when people knew what a suit and tie were.  Back when white collar meant, dress shirt, which meant, suit, which mean necktie. 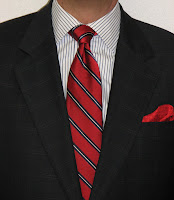 I looked back up and told her that I worked for a living unlike the rest of the bums in the place.  Ok, no I didn’t.  Instead, I mumbled about meeting with clients and wanting to make sure they knew they were important.  So I dressed up.  She, in turn, gave me a blank stare and handed me my change (yes, I still pay in cash because I am a geezer).

A strange bit of paranoia seeped across me.  It seemed as though everyone in the restaurant was looking at me with bewilderment and anger.  Dead blank facial expressions that seem to say…Who is this strange man?  What country is he from?  What is that red stripped fabric noose doing around his neck?

Call me old fashioned, but I still enjoy putting on a suit and tie.  I’m a rare beast however.  Even the bankers and politicians in town have lost the tie during the summer months.  What is this world coming to?

Not ten years ago I could go into a store and be mistaken for the general manager.  Now I’m mistaken for a wacko.  Ok, I might just be nuts, but it has zero to do with wearing a tie.  Crazy people have NEVER worn ties.

So, what will you find unusual at Home Depot in early October?  Me.  Wearing a tie and hearing over the loud speaker, “Step right up, folks, step right up.  Come see the man who has mysteriously traveled through time.  You won’t believe your eyes!”

Run in Peace, Rest in Grace
Posted by Randy Runswithacross at 3:37 PM