After three educational years, my first ever road bike and I said our goodbyes over the weekend.  I introduced Fuji to everyone in September of 2013 after plunging head first into the sport of triathlon.    At the end of that month I did my first race.  It still surprises me that I stuck with it after many false commitments. 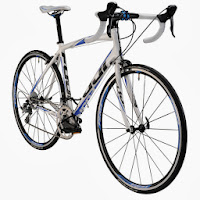 While riding more than 3,000 miles in her saddle I learned about cycling.  More knowledge came while doing routine maintenance and changing flat tires.  The metric system no longer intimidates me like a grade schooler.  Fuji made cycling fun.  More fun than I ever expected.

Like many relationships, we parted ways after I moved my attention to another.  It wasn’t an easy decision, but bike envy was winning out.  Fuji’s aluminum frame and entry level features no longer sufficed.  As my races get longer a faster and more advanced bike is appropriate if one can afford it.  The time to get serious about a new ride.

So that she could get out in the open now and again after I acquired a new bike I planned on selling Fuji cheap.  She deserves a home.  It turns out that the secondary market for a three year old starter bike is almost non-existent.  Rather than donate her, I settled on keeping her around to cobble parts off of from time to time.  The saddle is comfortable, tires are new, and the wheels are nice to have as a back-up.

Over the summer, my son took her out on a few rides.  While on our fishing trip he suggested I get the new bike so he could take Fuji back to school.  It did not take long for that suggestion to take flight.  I’d been shopping on and off for more than a year.  I knew how much more bike I wanted to justify making a change.  Not ten steps up from Fuji, but two or three would provide noticeable improvement.  It was only going to happen if the price point was just right.  Fall months are when dealers start discounting to clear space for new inventory.  So, I suppose you can say the price was just right or I convinced myself it was with this newfound motivation.

So, Fuji and I spent one final ride together before I gave her a thorough cleaning and tune-up.  I walked my son through a brief tour of what was what while showing him how to operate the new bike bump and other gizmos I purchased to make the bike uniquely his.  Once he loaded her in the back of his truck, that chapter ended.

What has happened to Fuji is wonderful.  She went to stay with family and is destined to return to home base once more.  We went through a lot together and being able to gaze at her down the road will bring fond memories.  Heck, I might just take her on a spin if she’ll let me.

Rest in Peace, Run in Grace
Posted by Randy Runswithacross at 11:31 AM