I have no idea why I’m writing yet another race recap from Cowtown.  Let’s see.  Well organized, great course, and good crowd support.  To be honest, I think most of the established races have nailed it.  I run Dallas and Cowtown year after year because they bookend my race season and I can count on a great experience.  And much like Nascar’s season starting at Daytona (the best race of the year), I start my season with Cowtown.

The only wildcard from year to year is the weather.  Generally good for both events with the exception of wintery weather at Cowtown (2015) and Dallas (2013).  This year the weather was not much of a factor.  Even though the temperature rose from mid-40’s to over 60 degrees, the humidity was mild.  If I had to gripe about something, it would be the strong winds throughout the morning.  This made pushing the pace for the miles along Main Street more draining 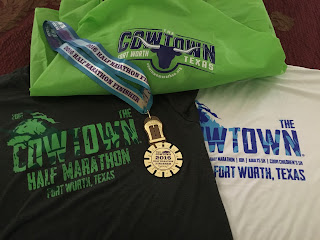 No need to give a blow by blow recap of my race.  My 23rd half marathon went about as well as planned.  That is, if I had a plan.  I find that these races have become so routine that I do little in advance planning for race strategy.  Strategy for me has evolved into a simple mantra.  Start slow and less slow.  Given that most courses measure longer than 13.1, I know I need to average about 9:00 minutes per mile to break the 2 hour barrier.  So, I try to keep the first half above 9:00 and the second half below.  I continue to run negative splits race after race, but the delta is shrinking.  I fear it won’t be long before age catches up with me and the anticipated second half effort is no longer within my reach.

The other thing I continue to notice is the increased number of the slower runners.  I’ll put my stats below, but being in the top third of participants has nothing to do with me getting faster.  The pool is growing and most are getting behind me.  I’ve written this before, but I point this out to simply say that running is for anyone.  The athletic and non-athlete alike.  All are welcome.  I’m not sure when we’ll reach the tipping point of too many races or too expensive entry fees, but it is nice to see so many out training on a day to day basis.  Keep it up!

Now, it is my time to ramp up the swimming and cycling.  Triathlon season in ON!

The possibility has always been there.  Inevitability is more accurate.

I went out on a 20 mile ride Saturday and after seeing a bike tube on the side of the road I was reflecting on the fact that I had never had a tire go flat.  In shock at my stupidity I scolded myself for the thought and moved on to other topics.  Yes, I have conversations going on in my head all the time.  No, not the kind anyone needs to worry about…or I don’t think so anyway.

With five miles to go, I heard an unfamiliar sound.  It was a short pop followed by a constant hisssssss.  While the sound may have been new to me, there was no doubt what happened.  My rear tire was going down! 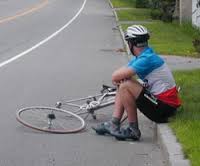 After coming to a quick halt, I unclipped the pedals and turned to feel the wheel as if it might not be flat.  Why I bothered to do this is anyone’s guess.  There was zero doubt what had happened.  I’ve always wondered if I would know when a tire went flat.  The curiosity may seem silly, but I have only had slow leaks in the past. The ones in which you get finished with the ride and notice the tire is low on pressure.  Mystery solved.  Yes, I would know.

The good news is that I carry a spare tube and the necessary tools to change a flat.  This includes the tube, tire levers, and a CO2 cartridge with adapter to inflate the tire.  The bad news is that I have never actually used a CO2 cartridge and only changed a few tubes in the comfort of my garage.  Even though I carried the gear, I was certain that I would fuss with it for 30 minutes and accidentally discharge the cartridge before attaching it to the tube.  It happens.  I saw Chrissie Wellington do just that on the TV coverage of an Ironman.

The inevitability of having a flat was only matched by my expectation to be walking home after the pending failure.

I was blessed to flat near a closed road that had plenty of shade.  This allowed me to walk my bike a bit down the road and sit under the shade of a tree.  The change was going to take awhile so I didn’t want to get too exposed to the elements for fear of death by dehydration or sun exposure.  I was also out of plain view of passing traffic.  It would be embarrassing telling people passing “No thanks, I got this.  Just taking a few hours rest and enjoying this beautiful day.  Thank you..really, I’m fine.”

This is a common bike route and most folks offer to help a stranded cyclist.  One time I offered to help a guy with a flat and his response was pretty much like the one I anticipated giving.  I rode off and thought to myself, Thank God.  What a curse that would have been for the poor guy.  The one dude out riding who does not know how to change a flat is the one he picks to help.  All the other cyclists perceive it is under control so ride on by.  We would have had to call AAA.

If you read the message boards or keep up with various bloggers, they talk about blowing a tire all the time.  When I started riding I assumed it was as common as armpit sweat.  If you’re gonna ride, it is going to happen and happen often.  This built up great fear within me and almost made me rethink this whole triathlon thing.  Fortunately, I went well over two years without it happening to me.  I don’t ride as much as I should, but tide enough that I assumed they made that garbage up to get people like me off the roads.

The positive thing about a fear is that if you don’t let it cripple you there is a chance to beat it.  I must admit that I watched countless YouTube videos on changing tubes.  Even though they made it look easy, I knew I’d have a 50/50 shot at best of doing it.  Nevertheless, I was prepared to face the fear should…sorry, when faced with it.

After a very deliberate and lengthy effort, I was ready to inflate the tire.  I connected the adapter that allows the cartridge to release gas into the tube.  I took my time and was rewarded with a tire ready to go.  It is a good thing the road was closed because I was visibly celebrating.  Even though the thing could still go flat any moment, I had at least gotten air in the tube.  I could blame a second flat on bad luck, but having to call home for a ride and explain that I was an incapable loser would be unbearable.  Expected, but unbearable nonetheless.

I rode the five miles home and confirmed that the tire was still inflated.  Hot Dog!

I was lucky to have my first flat on a short training ride.  Had I been 20 miles from home on a busy street the pressure would have been much greater.  I’d say that flatting in a race would be even worse, but I don’t think I’d bother to change it.  The race would be shot and as long as they had a sag wagon I would just call it a day.  Guess I won’t know until I get there…and Yes, I know, I know, I will get there.

Run in Peace, Rest in Grace
Posted by Randy Runswithacross at 2:32 PM