Going on an Adventure

Sometimes getting there is exciting, and other times it is not.

I needed to fetch my bib number and race t-shirt today for the Dallas Half.  Rather than drive the familiar route as I normally would, I chose an unlikely source of transport.  Public Transporation!  Yes, just like Bilbo Baggins, I went on an adventure!

I spent entirely too much time downloading iPhone Apps, Maps, and Schedules.  Following my morning routine, I opened my App and bought a Day Pass for $5.  It was off to the station after packing a few essentials. 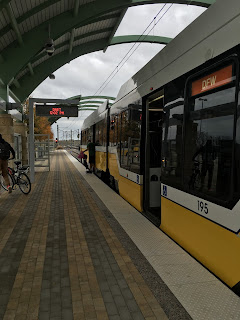 Light rail is a cool concept.  A concept cool for others since I’m the only sap who hadn't used it yet.  I would like to note that while I might be sap, I know the rules of mass transit in a party of one.  Earbuds are a must.  Music piped through the earbuds is discouraged so that you can be aware of things around you.  You should also never make eye contact.  Even if the train is nearly empty, you do not want anyone to talk to you.  Finally, look angry with an edge like you might just go off on someone if they sit too close.

I boarded my train as scheduled and abided by the rules above.  I chose this free time to journal.  Mass transit is so friggin' awesome.  Thirty-nine minutes of down time.  Part of me wanted it to take a few hours once I settled in.  Since when do I get this kind of unhindered time?

About halfway from suburbia to downtown, a different element started boarding the train.  Folks were angrier looking than me and might not have showered in a few days.  Everyone just sat and starred out the window without incident until the cat across the aisle from me took a phone call.  This guy wrote the book on swear words.  It was colossal.  Oh, colossal and LOUD.  He even woke a sleeping homeless guy a few seats away.

Near Parkland Hospital, a nurse got on the train.  Not just any nurse.  Yes, she was wearing scrubs, but she had two one dollar bills pinned underneath her nametag.  What the heck?  She was showing a bit of cleavage, not that I look for that kind of thing, so maybe she was one of those strip-o-gram nurses.  You know, the ones people send to the hospital when people are sick to cheer them up.  I’m sure she’s real popular with the nursing staff.

I had to change trains at the West End.  Well, I could have walked six blocks, but I was on an adventure remember.  I  should have walked.  There were a lot more people at this station.  I had only 5 minutes until my next train, but I didn't want to mingle so walked over and stood with my back to a building.  It was just about then that a pigeon crapped on my head.  No kidding.  I saw something hit the ground first and then a plop on my noggin.  You don’t get this treat riding in your car.  There was nothing to do other than laugh at the situation and use my handkerchief to pick bird crap out of my hair.

Once at Dallas Convention Center I headed for the Expo.  No reason to give details on the Expo because if you’ve been to one recently it was just like that one.  If you haven’t been to one, I’ll save the tremendous excitement for you.  Wouldn’t want to ruin the experience.  Besides, I didn’t spend a lot of time there.  I wanted to get back on that train and experience life.

Reversing course was easy.  Yes, I spent way too much time researching this stuff in advance.  At this point I’m an old pro at the public transit thing.

The trains were significantly more crowded as midday approached.  We didn’t have to share the two seater benches, but most had at least one occupant.  It was fascinating.  People from all walks of life in a single train car.  There was a guy across from me talking.  He had a single earpiece in so I assumed he was talking on the phone.  NOPE.  This cat was just plain nuts.  He was talking to nobody.  I saw the plug end of the earpiece hanging out of his jacket.  He kept looking at me and I kept looking away as though I wasn’t looking at him.  Why do we do that anyway?  Why do we think if we look away real fast that it didn’t even happen.  “Who me?  I wasn’t looking at you.  I was moving my eyes from other here to over there and you just happened to be in the middle.  I apologize for the misunderstanding.”  Yes, that is total B.S. and we all know it.

Even though I broke the “don’t make eye contact” rule, I survived the rest of the ride.  It was a wonderful adventure and will be a method of transportation I use in the future.  It was crazy easy to use and provides countless perks.  Not the least of which is people watching.  The kind of people watching that does not require eye contact.

Posted by Randy Runswithacross at 4:39 PM