Fort Worth, Texas - I woke at 4:00 AM to check my phone for the cancellation e-mail from race officials.  It wasn’t there.  Surprised?  Yes.  Prepared?  No.

We had just had several days of school cancellations and a city on virtual shutdown due to snow and ice.  The Saturday races were all cancelled.  I thought the afternoon Race Expo & Packet Pick-up were only open so they could salvage a few sales for the vendors.  The roads to and from the race site weren’t unpassable.  But streets through downtown were icy and piled snow lined the curbs.  With temperatures below freezing overnight and most of race day, I just didn’t think they would risk it.  Heck, the parking lot was more easily traversed in skates than Nikes. 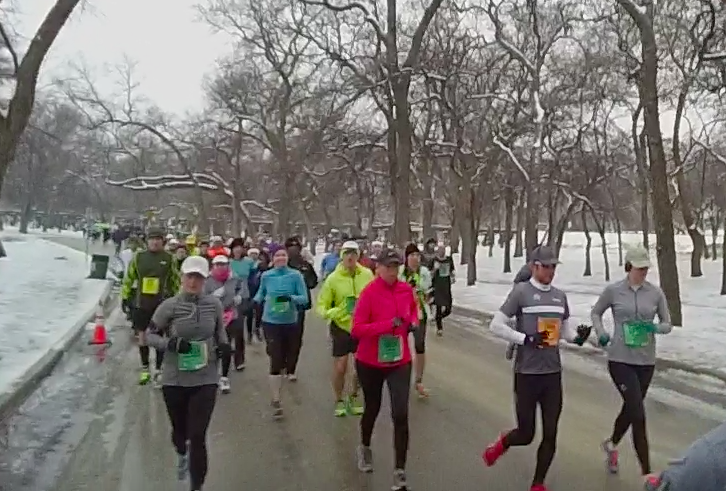 I rose in slow motion, ate my semi-standard breakfast and began my pre-race routine.  The night before I had so little confidence that I didn’t pack anything or even lay out my intended race gear.  The whole morning was just off center.  When I arrived at the race site, I realized that I had forgotten my “go to” race fuel (Clif Shot Blocks).  Rather than stress about it as I would have on a normal race day, I just tossed it aside and decided I’d drink the sports drink du jour.  It was only a half marathon.

Rather than give a standard race report, I’ll hit the highlights and move on. 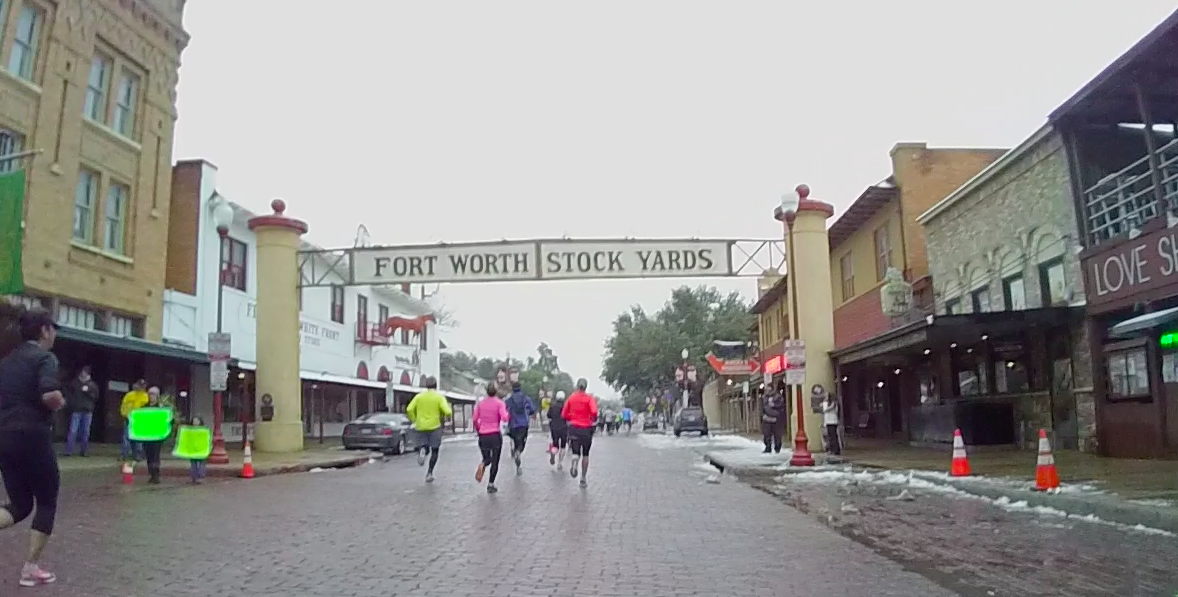 Roads and walkways had cleared more than I expected.  There were still danger spots, but the course was indeed good enough to prevent cancellation.  They did cancel the full & ultra marathons since much of their routes travel through tree covered parks and clearing the paths was impossible.

A smooth start and the racers thrilled to finally be out of the house, finished with training, and running at last.  The pace was off and there were times when things would yo-yo as we approached pools of water or snow banks.  When traversing a bridge one could only run in the ice free ruts carved by vehicle traffic the day before. 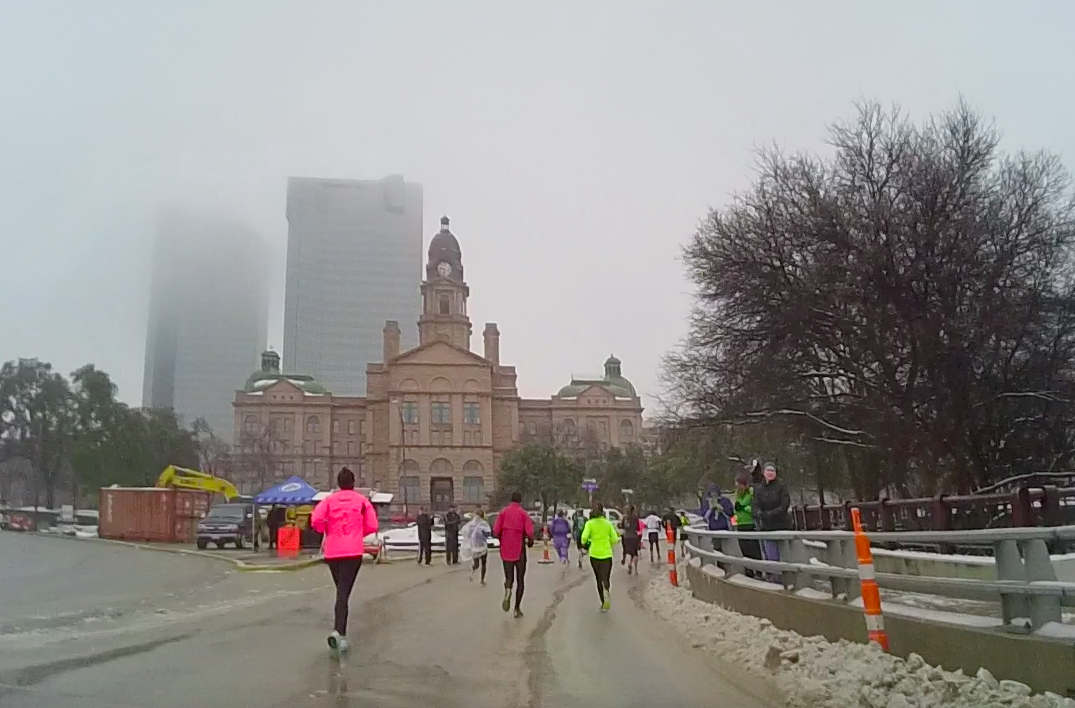 The weather was overcast and just below freezing.  The volunteers showed up as promised.  These are the heroes of the race.  It would have been quite easy to pretend they cancelled the race and stay in bed.

I had trained hard enough, fast enough, and long enough to flirt with my PR.  Yet, this day was not going to allow for my best effort.  It wasn’t as though I just tossed in the towel and jogged.  I thought my effort level was fairly high.  I simply wasn’t hitting my splits.  This was partially due to the street conditions, but the body and legs just were not delivering.  By mile 9, I was a few minutes slow and decided that I didn’t have enough real estate left to make a try at sub-1:56 to approach a PR. 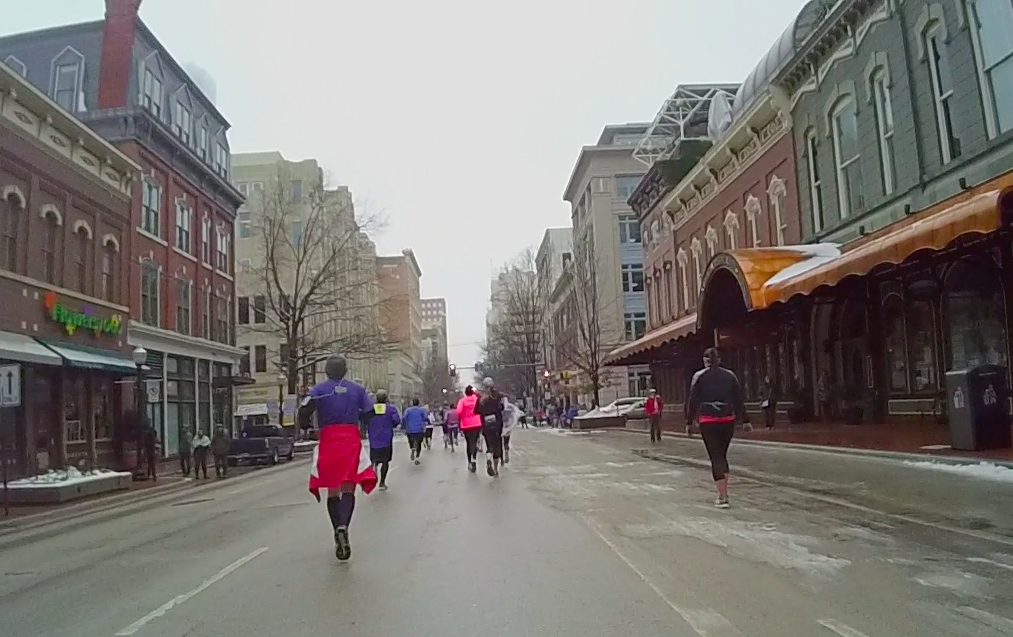 What I had left in the waning was more than most.  As is normal for me after the Fort Worth hills, I was passing people at a steady pace.  It is always fun to see someone glance over as you pass by, pick up their pace staying just off your back shoulder, and then fade hard after less than a minute.  I’ve been there.  They are using you for motivation.  “I can hang with that guy.  Come On.”  Then, Mr. Wimpy whispers to them, “Let him go.  You’re not going to prove anything by suffering like this.”  And…Mr. Wimpy wins the battle.

Nice medals, great volunteers throughout, wonderful (and more than ample) post race vittles, and a steady supply of Miller 64.  I’ve concluded that this is safe beer for them to serve at these events.  It will not make you drunk, but helps with hydration given the ultra low alcohol content.

Cowtown remains my favorite race even though they had an off year.  They can’t all be perfect.  I will be back next year.

Run in Peace, Rest in Grace.
Posted by Randy Runswithacross at 12:24 PM