Back from Retirement - The 2014 Mayor's Triathlon

For weeks I had been trying to decide what to do next about this whole triathlon thing.  After some open water swims (OWS) in late spring, it became very clear that I was in no way ready to jump to an Olympic distance race because I was not confident of surviving an OWS.  Ok, I’d survive, but certain to have anxiety and come out of the water exhausted from mental strain alone.  The distances were not daunting.  Yet, meshing it all together after the swim was going to be a problem.

So I stewed on it.  Maybe I wasn’t cut out for this thing.  I enjoyed the three disciplines and the amount of work, but maybe there was a reason I had only been a runner the past 20 years.  So, I unofficially retired and took most of the possible events off my race calendar for the year.

My job puts me in front of our local elected officials every once in awhile and when the Mayor saw my Road I.D. (being a cyclist herself), she wanted to talk bikes.  When I told her I was really just a runner who dabbled in triathlon, She asked me to run the Mayor’s Triathlon.  I said I would to move off the subject, but I had already crossed that off the list.  I mean, I was retiring from triathlon after all.  I certainly wasn’t going to spend money on a Sprint distance triathlon.  Too easy.  Plus, I get sick of people asking “is it a full triathlon?” (obviously referring to an Ironman distance race).  Once I divulge the minuscule length they attempt to remain impressed.

A few weeks ago, I realized when I said I took “most” of the events off my calendar, I left open the possibility of something this fall.  I enjoy the training and without a possible race I had too many excuses to skip workouts.  Just days later I convinced myself there is no better time to get back into it than now.  I’m flaky that way.

So, what changed.  Well, I thought that even if I’m not ready to step up to the next level I would one day get the itch to do so.  I might as well get some easy races in so I could work on things like transitions and gear.

That brings me to July 13th.  Sprint distance Mayor’s Triathlon.  7:00 AM start in the downtown Fort Worth YMCA pool.  The bike was 15 miles rather than the 12 I traveled last fall in my first event, but the swim (300m) and the run (5k) were standard sprint distance stuff. 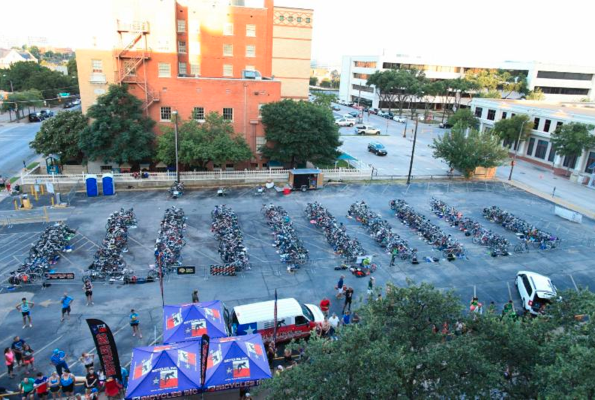 As I unloaded my bike and headed for transition, I was surprisingly calm.  It was like going to a half marathon or something.  All business.  Even as we lined up for the swim start, I was comfortable.  Accordingly, the swim went extremely well.  I shaved 30 seconds off my swim time and even had moments of pure relaxation.  When I got behind a slow swimmer, I didn’t try to swim by them I simply waited until the end of the lane and passed freely.

Transition was uneventful, but this was the first time I wore cycling shoes so walking the bike to the “bike out” line was awkward.  Having an audience led to some sudden flaws in my abilities.  I had trouble getting cleanly on the bike and clipped into the pedals.  This is when my peaceful measured approach fell apart.  At the first intersection (6th Street) I turned right thinking the officer was pointing me that direction.  The officer’s hand was up to the right holding oncoming cars…not giving me directions.  I recovered quickly and remembered the pre-race meeting from an hour earlier when they said the first turn is at 10th street.  Oh yeah.

These little incidents take something out of you.  I don’t understand it, but they do.  If your strength in an event is compared to a book of matches, mistakes burn a few matches.  I continued to burn match after match on the first loop of the bike.  I kept telling myself to slow down, but I’d come to the base of a hill and have to power up it or approach a slower biker and need to kick it hard to pass legally.  My heart rate was firing at 80-90% for almost the entire bike leg.  I was shot.  My back was stiff and I developed a pain in my left leg.  Things were not going real well at this point.

I need to enter an event with a flat bike course.  This one was not flat at all and while I was faster in MPH than my previous race, I was more gassed than my first race (also very hilly).  Of course, I was a new cyclist then and knew that hilly course would be a struggle.  I guess I wrongly assumed I’d be much better now and rather than casually ride I raced it.  It was costly.

Another smooth transition and I was off on the run.  This is supposed to be my specialty.  Hard to take advantage of your strengths when there is no more fuel to burn.  My heart rate was 90%+ so I was forced to throttle back even though I felt ok.  The last thing I wanted was to have my heart explode on a measly sprint triathlon.  The course is a familiar one to me and when I ran down the steep hill on the first mile approaching the Trinity River, I realized I’d have to run back up that hill near the end.  This, my friends, is cruel.

Nobody passed me on the run, just like last fall.  I was holding back, but this part of the race looked to be about survival for almost everyone.  Just keep moving and finish.  With a mile to go, I walked up the monster hill and crest the top with newfound energy stores.  I took that last half mile in sub-eight minute pace and finished strong (27:43). 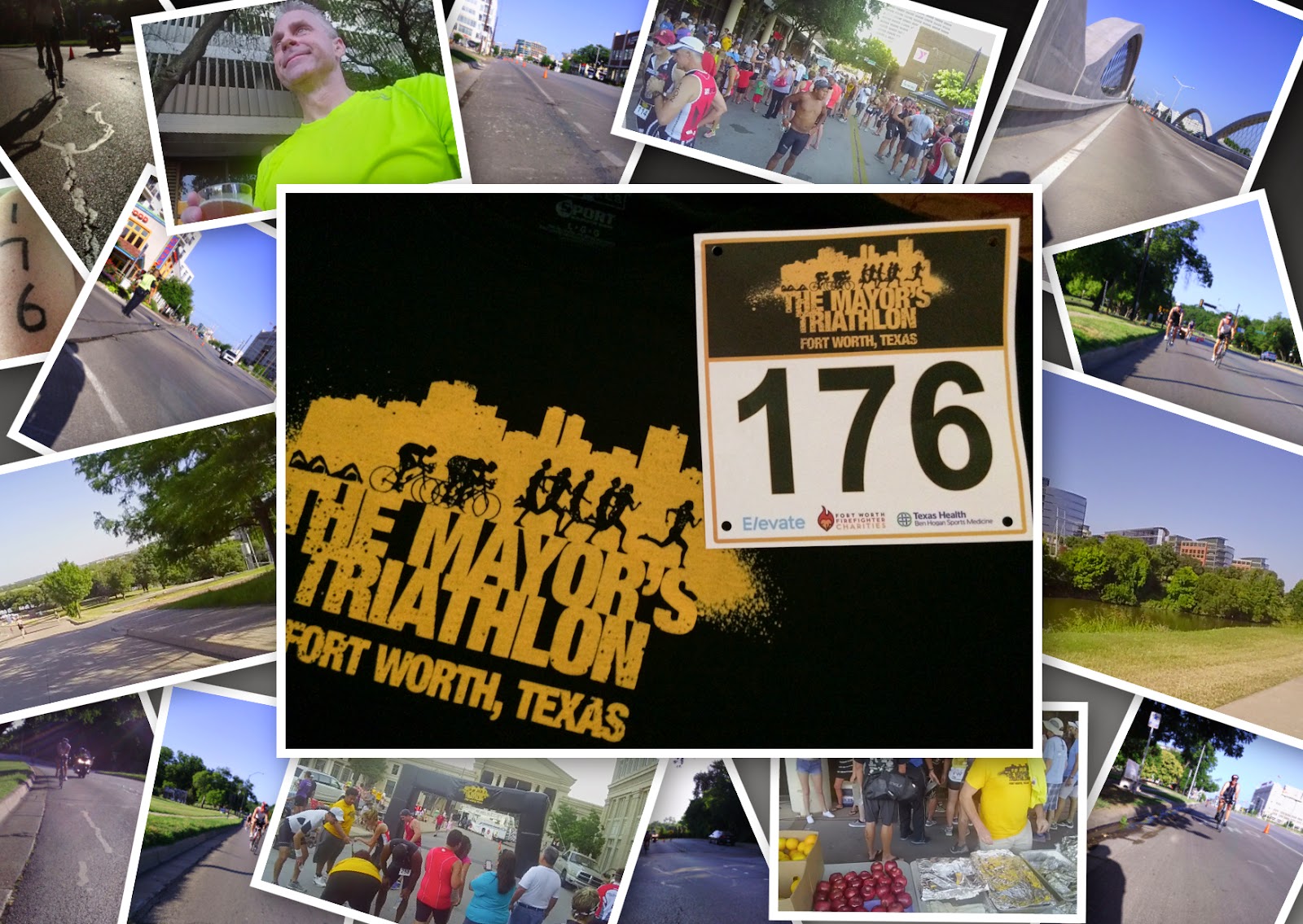 Overall time was 1:31:14.  I’d like to tell you that was much better than before, but the results are all messed up on the website so it is impossible to figure out how I did in relation to age group or sex (which since the distance isn’t standardized would be more informative).  My swim was faster, my bike was faster (MPH) and my run was a tad slower.

The event itself was organized very well and the post race goodies (breakfast tacos HELLO, fruit, water and BEER) were fantastic.  Triathlons draw smaller crowds because of field size limits, but it was a great group of racers and spectators.

As for me, I learned a lot.  This is why doing more races, even “Easy” ones, is important.  This should not have been so tough on me.  I was completely cooked.  My training had double the distance in mind.  My training also left me unprepared for a quick twitch effort.  I’ve been training at super low heart rate so I could put in big volume (hour & miles) each week.  I need to mix in some speed work so my body knows how to respond to a hard effort.

I still want to do the longer distance triathlons, but maybe I should stick to these short course races until I can pull one off feeling like I balanced my book of matches across all three disciplines.  Then, and only then I can take the next step up in difficulty.

Lots to work on.

Run in Peace, Rest in Grace
Posted by Randy Runswithacross at 4:33 PM