My wife and I have a deal.  She does all the laundry except my workout clothes.  It’s not that she’ll unwilling to do it all, I just decided that doing a separate load of the REAL smelly stuff made sense.  Am I charitable or what?!  Anyway, by doing this special load I could use a more intense wash cycle and the pull things out after the wash that I didn’t want to go in the dryer.  This has been a good system….for me anyway. 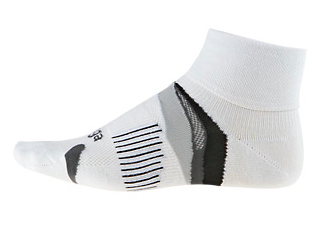 So last night I was folding my clothes.  Completely uneventful until I reach the end and started pairing up socks.  Yes, you guessed it wise one, I was missing a sock.  This happens.  In this case, however, I got really irritated.  This pair I had worn only one time.  Just once.  Dang it!  I’m cheap, but I splurged and picked up this pair for $16.  Ouch.

I soon realized that I now own ONE $8 sock.  One lousy sock.  No, it was not worth $8.  It was worth nothing because you can’t wear just ONE sock.  How can this happen?  I’ve lost dozens of cheap cotton socks…but this was basically a brand new sock that went to the sock fairy.  Why me?  Like sunglasses, I should know better than to buy expensive socks.

I woke the middle of the night with a brilliant solution.  Just buy another pair.  Yes, drop $16 on another 2 socks.  I would have 3 total.  This is like insurance.  Yes, a $16 insurance policy in the event I somehow lost yet another one of these miracle socks.  I’d still be in business.

The real kicker is that…Yes, I found the lost sock.  It was just laying there on the floor near the laundry room door.  Huh, go figure.  I should have looked there last night.

Run in Peace, Rest in Grace
Posted by Randy Runswithacross at 12:00 PM

The past 10 months or so have been full of exciting new things in my life.  Exciting to me, but crazy or dumb to others because they involve exercise.  The most recent was riding in my first ever organized bike ride.

I had little reason for selecting this event other than it fell on a day that I was available and the weather looked like it might cooperate.  It also offered a casual bike rally format (no winners or losers) and covered a lot of the same course (only backwards) that I’ve run several times in the Dallas (White Rock) Marathon. 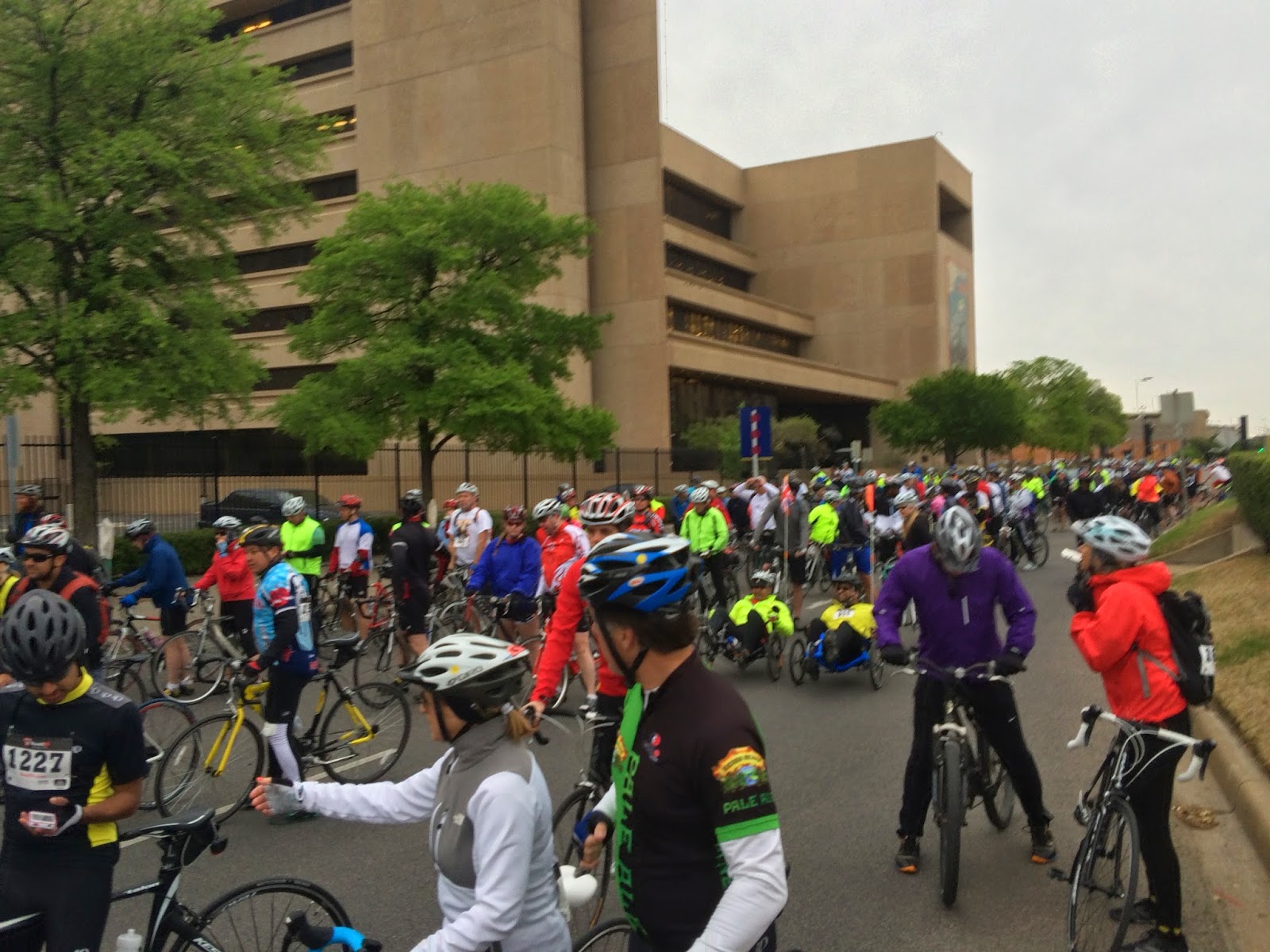 Since I have minimal experience on a bike and was limited to an indoor trainer all winter, my goal for the spring was to get more seat time.  I also lacked any group ride experience.  While I don’t recommend learning this at an organized event, I knew most of the “rules” and planned to find as much open space as possible, stay to the right and pay attention.

After a wonderful week, the weather Saturday morning had turned overcast and a bit chilly (mid-50’s).  Perfect running weather...of course.  Once I arrived downtown and unloaded my bike, it was clear I needed to add another layer.  I ended up being very cold for the first half of the race.

Tour Dallas 2014 offered slightly abbreviated distances this year compared to previous years due to road construction.  I opted for the longest (27 miles), but with 6 & 17 mile routes, they had something for everyone.  This was clear by observing the widely varying participants and bikes in the start area. 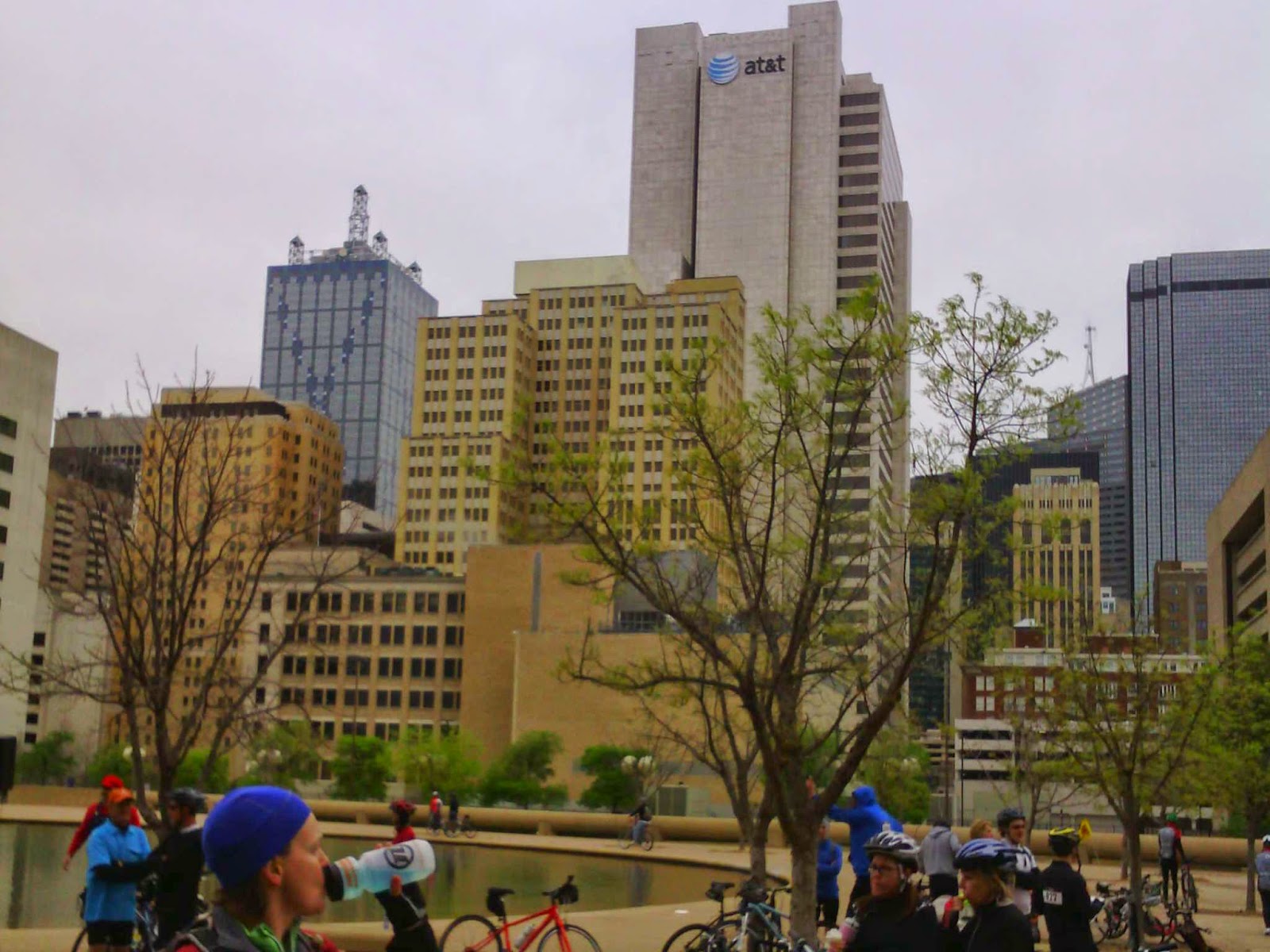 I lined up near the back.  There was no major production to start the race.  The director said something inaudible over the loud speaker and before long you could see the folks in front of you slowly easing onto their rides making sure there was plenty of cushion around them.  This is so unlike a running event.  At large road races, people just take off at the first sign of movement only to pull up a few feet later when the people in front of them return to walking or stop completely.

The early pace was barely measurable.  It slowly built over the first mile allowing for what appeared to be very healthy spacing (as if I know what healthy spacing is...).  The 4,000+ riders were grouped together, but I had just enough room to move slightly right or left to avoid a pothole, cone or lane bumper.  The communication was great.  For example, we approached a DART rail crossing before heading up Swiss Avenue.  Pre-race rules explained that trains had the right-of-way.  Once the crossing signals went on, voices from the front that were going to get stuck behind the train started yelling “slow” or  “slowing”.  This is then relayed back through the group.  Everyone eased off slowly and came to a stop cleanly.  Very cool. 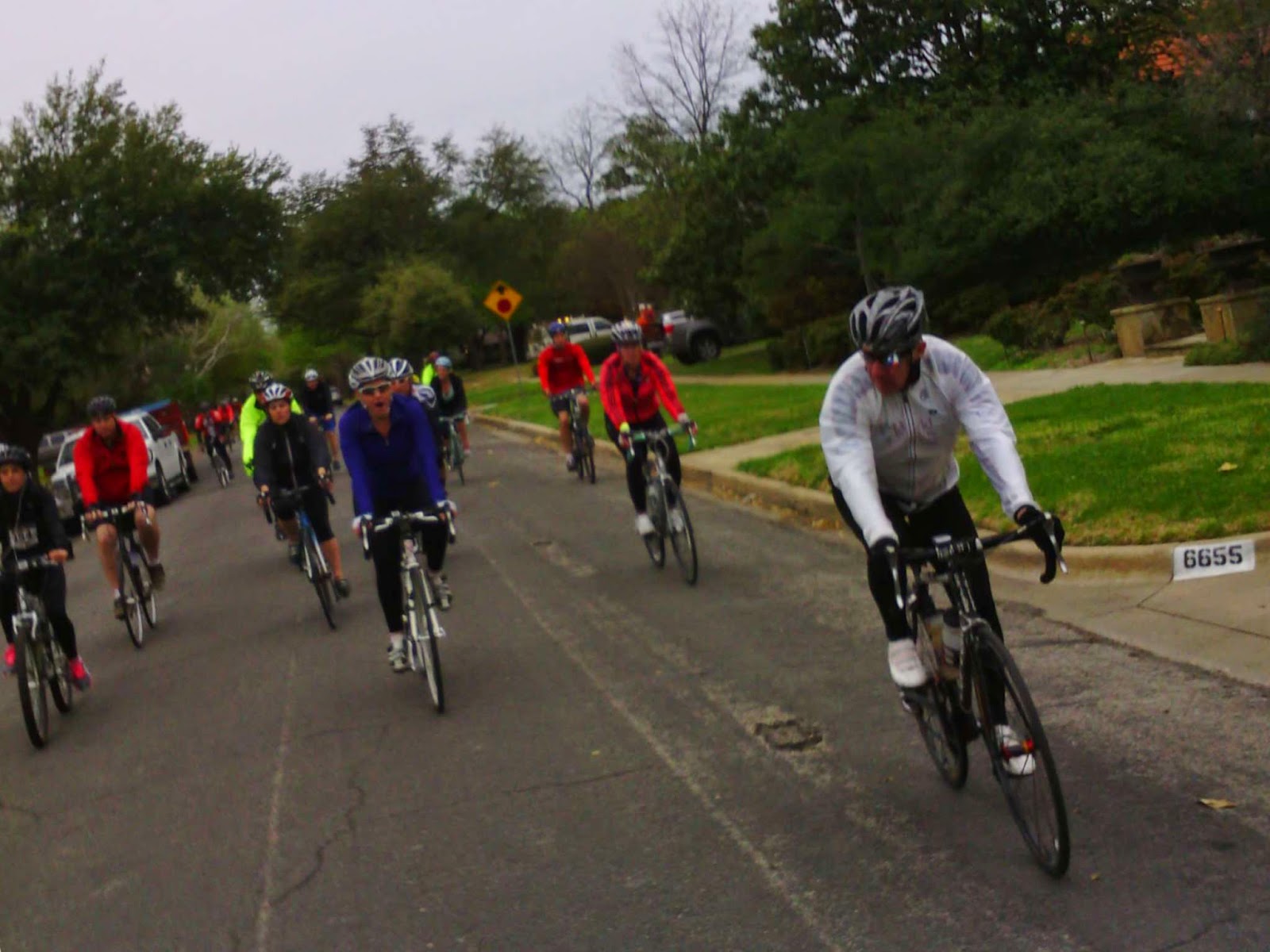 It is no surprise that several folks had flats.  At first I attributed this to potholes and expected this to be common all day.  Interestingly, I don’t believe I saw a single flat after the first 5 miles.  My guess is that being grouped together prevented riders from being able to maneuver enough to avoid a hazard.  I’m simply grateful that I came through clean and kept the rubber on the road during my first ride.

This was an open course, meaning no street closures.  The organizers had hired off-duty police officers to get us through intersections, but there was an occasion or two in which we had to stop or slow.  While not ideal, it did break up the pack.  Deciding whether or not to chase down the group ahead or sit back and coast with the group was a lot of fun.  Since I was a naturally hyped up on my first organized ride, as well as
feeling the pace a bit too pedestrian, I chose to work my way to the front and reach out for the group ahead at each opportunity. 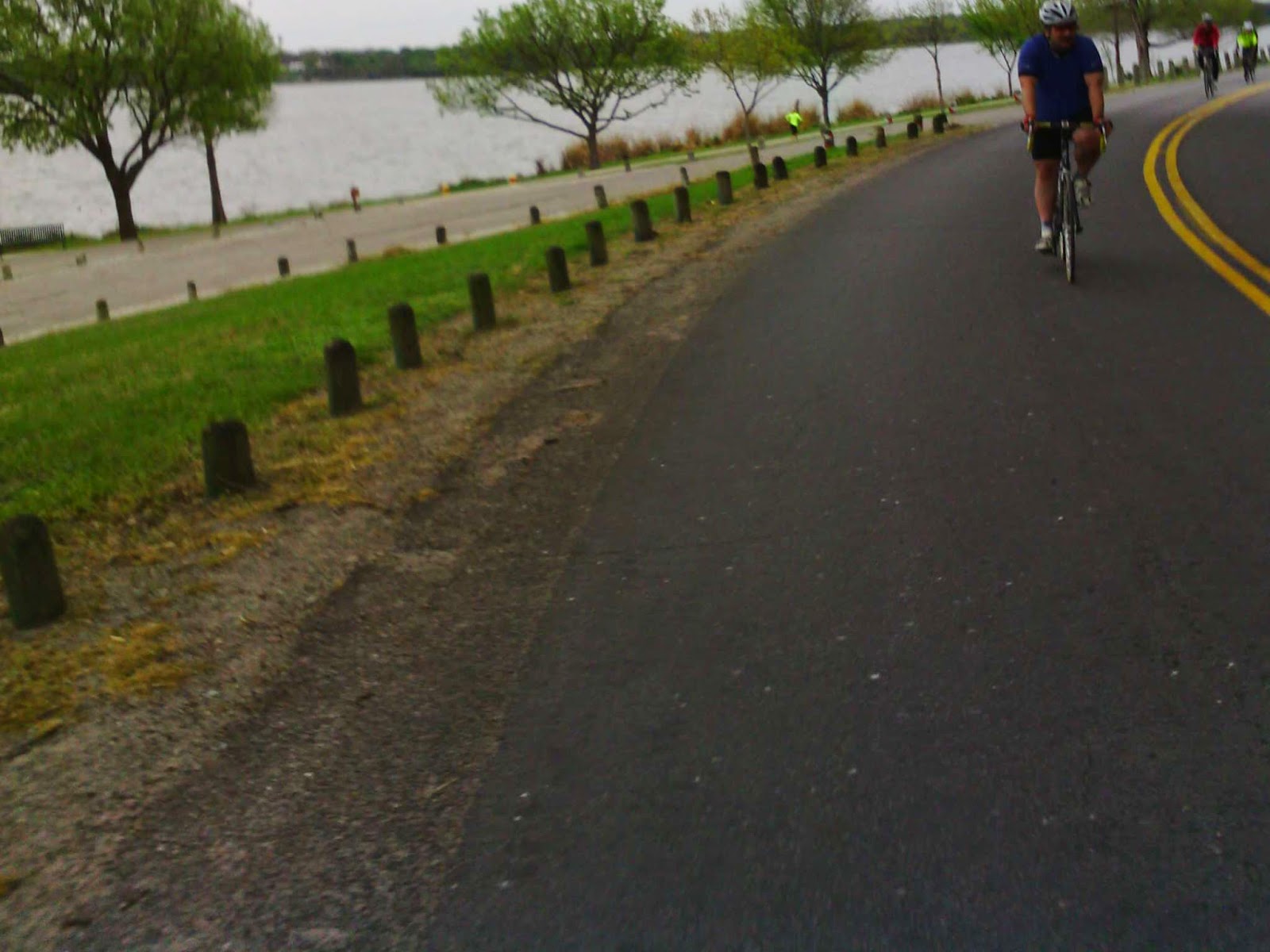 The nine miles around the lake were easily the most enjoyable.  While I consider myself a Fort Worth guy, I cannot deny the treasure that east Dallas has in White Rock Lake.  I never really noticed the endless number of runners, walkers and cyclists when participating in a road race over there.  It reminded me of Austin around Lady Bird Lake.  The only stopping during this portion of the ride was at the first Break Point.  More on that momentarily.

The final 8 or so miles found us headed west across Uptown and then down Turtle Creek Boulevard into downtown.  Another Break Point along the way and some fairly significant pothole dodging to the finish at City Hall.  Familiar sights and a great First Ride.

Break Points are common on these longer rides.  While I’m sure not everyone stops, it seemed the back half of the field certainly did.  This is interesting in that youpark your bike.  Walk around.  Grab food and a beverage.  Refill water bottles.  Use the restroom.  Chat for as long as you wish and then, at some point, get back on the bike and start riding again.  This is no NASCAR pitstop.  It’s more like a church potluck dinner.  Between the two stops, I have no doubt I consumed twice as many calories as I burned during the 27 mile ride.  Defeats the purpose?  Maybe, but I think that must be what training rides are for... 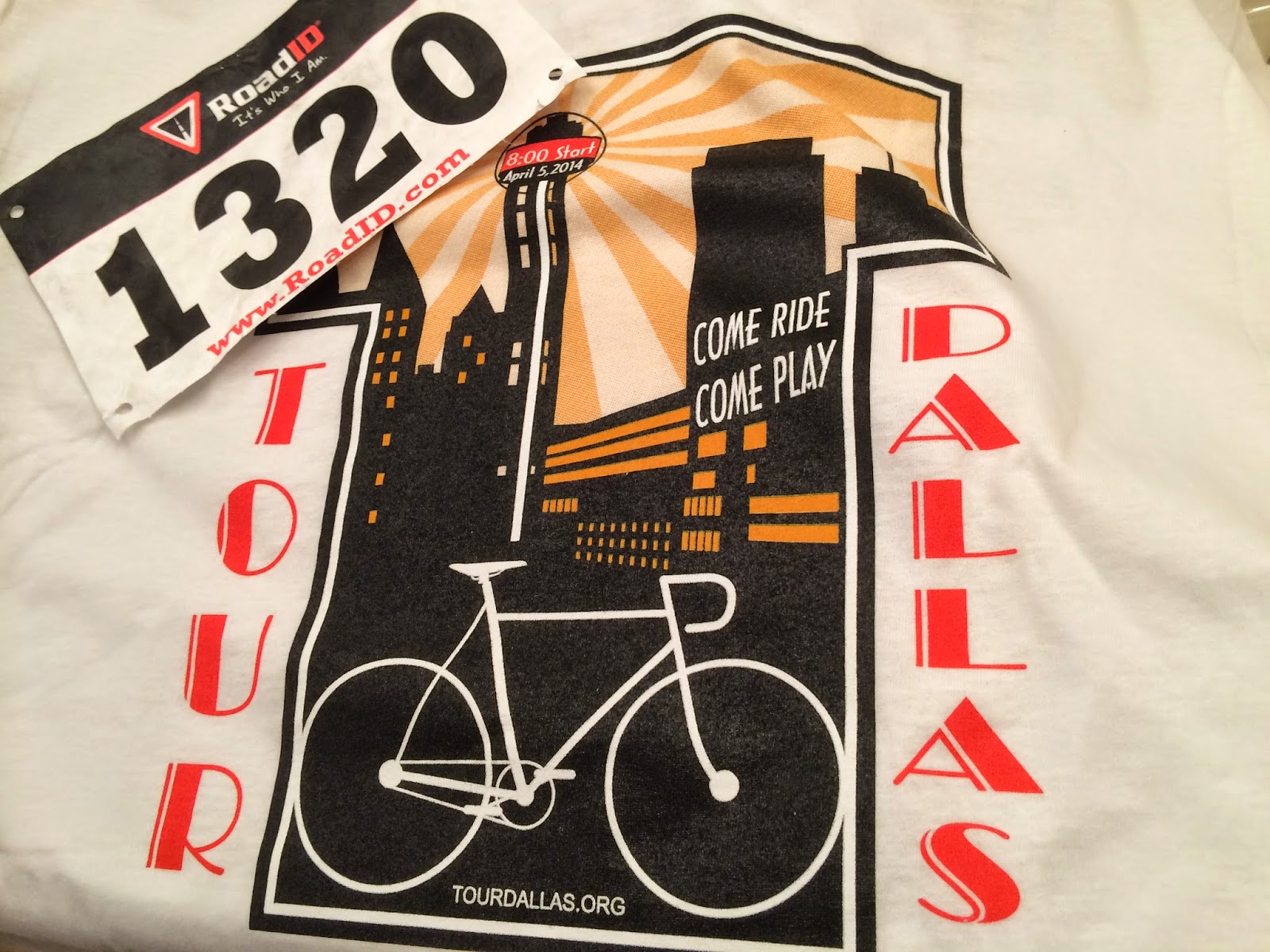 Finally, the race seemed very well organized and supported.  Since I didn’t register until a few days before, I had to do packet pick-up the morning of the ride.  No issues there.  Tons of volunteers there and at all places between that point and the finish line.  Food (hot pizza) and plenty of beverages in the finish area yielded a festive atmosphere.  I will return next year for sure.

I see myself doing many more casual rides in the months ahead.  They are typically held on Saturdays (making it easy on my church schedule) and I’m normally spending most of the first half of the day exercising anyway.  I will set a limit to save some money and prevent weight gain.

Oh, my finish time?  Well, it doesn’t matter.  Just a little over 2 hours as I recall.

Posted by Randy Runswithacross at 2:16 PM