Well it finally happened.  I sort of flamed out this morning on the training front.  Something didn’t feel right two days ago when I forced myself out the door at 5:00 AM for a routine 3 miler as a “wintery blast” arrived.  Afterwards I had the usual shot of adrenaline that comes from pushing through to overcome the desire to simply stay in bed.

That feeling wore off as the day moved along and only the opportunity for me to test out a new bike computer on the indoor trainer kept me off the couch watching TV after work.  Again, after getting started I ended up putting in a solid hour ride and had made it through “one of those days” without surrendering.

Yesterday morning the wintery blast proved real as 28°F was in front of me for a recovery workout.  I could have skipped it and recovered in bed, but I once again forced myself out the door.  Last night I had a swim on the calendar.  The prospect of driving to the pool in the cold, swimming and returning home shivering was extremely unappealing.  But again, I forced myself to do it thinking that it would help me snap out of the funk.

As the opening sentence indicates, this morning I simply gave in to the temptation to quit.  My alarm got goofed up and I woke up on my own at just past 5:00 AM.  Still plenty of time to fit in some speed work, but I could not force myself to obey this time.  I simply had run out of whatever mojo existed inside me that has had me going the past three months. 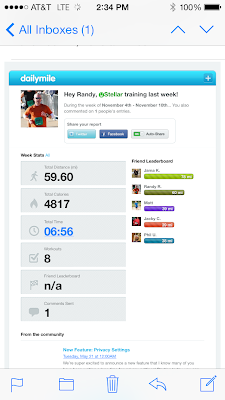 At first I assumed that I lacked motivation, but with three half marathons during the month of December on the calendar I have plenty of reasons to keep up the the hard work.  No, this is just straight burnout.  My body just said “NO, I’ve had enough.”  Actually, I should have seen this coming after getting my workout summary from DailyMile.

Almost 7 hours of workouts with just under sixty miles in a week is a lot for me.  Especially since I did a 12 mile long run on Saturday to make 24 of the 60 miles running.  Prior weeks came close in miles, but had a much larger percentage of miles on a seat rather than my feet.  A huge difference from marathon training which I clearly didn’t adjust for very well.

I should have taken some time off after the triathlon.  The races I had entered for December are the same ones I’ve done for years so I was already committed.  Once I got past the TRI, I sort of panicked because I had let my long runs lapse in that training except for the 20K a month or so earlier.  Had I run that race more comfortably, I probably would have backed off a bit.

Where I go from here is the tough part.  Since I have surrendered to the fatigue, I need to make sure I get properly rested and rejuvenated before jumping right back in the fire.  I have a pretty hard weekend planned.  Doing this without the proper re-rack could simply lead to another burnout in no time at all.  Yet, I don’t want to get lazy.

With each passing day I know I will get antsy to get back on the road.  It has become part of me.  What I do to stay sane.  I can’t image my life without it.  I pray often asking God to keep me healthy in my workouts and races largely because I don’t know what I would do with myself if I were sidelined for an extended period of time.  I’d drive myself and my family crazy.  I know this is a fine line that I’m walking and crossing too far over that mysterious line will result in injury or burnout beyond return.

So I’ll regroup and see how things go on Saturday morning.  See you on the rebound.

Run in Peace, Rest in Grace
Posted by Randy Runswithacross at 2:36 PM