September 21, 2013 - Dallas, Texas - Just when you think you have run all the races worth running, you are reminded that you haven’t even scratched the surface.  I can only guess that late September
normally means marathon training or fat & lazy.  I am blessed to report that fat & lazy hasn’t been my status for a number of years so the Saturday long training runs likely kept me from trying this race in the past.

This was a fantastic event.  I entered just a few weeks out when I realized that my triathlon training had all but eliminated runs over 6 or 8 miles.  I was doing these shorter runs so I could have enough juice

for much needed swim workouts.  With back-to-back half marathons over New Years (New Year’s Double) on the distant horizon, I got nervous that I’d finish my Tri in late October with a running deficit that made this challenge too difficult or likely to result in injury.  So heck, why not run this 20K?

The start and finish were at the Dallas Arboretum.  Walking through the Arboretum chatting with a friend from church, I was oblivious to my surroundings in the dim early light.  Reaching the starting line just outside the north gates at White Rock Lake for the 7:00 AM start, the run begins.

I don’t live in Dallas, but have run around the Lake many times during the White Rock (now Dallas) Marathon and several other events.  It is boring if you simply think  “I’ve run these roads/paths so many times”, but wake up, take a look around, it is such a treat.  I see why friends I know drive over from our side of DFW to do their long runs around the Lake.  Even without an event, the roads are filled with life.  Runners, walkers and cyclists in a constant stream.  On this Saturday morning, I can only image a good portion of them highly irritated at all these people hogging “their” roads. 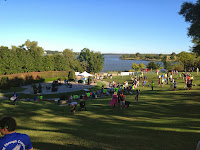 There was no noticeable wind with temperatures in the low 70’s most of the morning.  Again, simply perfect.  It looked as though the SMU track and/or cross country teams were enlisted to occupy the aid stations.  They did a fantastic job.  Plenty of water and Gatorade along with clear verbal encouragement and instructions at each station (water in front, Gatorade in back) which is exactly how it should be done. 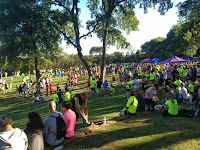 The only odd part of the course was an out & back section at mile 10 that was about a mile long on a wide paved path.  Odd because it was different scenery from the rest of the course with the Lake in full view.  Actually, because it was short it provided something new.  You could view the strength of those ahead of you as you approach the turn and see the “how much farther?” expressions afterwards.  I find this comforting and it interrupts the internal dialogue (self pity) at this stage of the race. 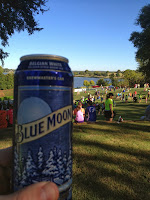 I finished with my fastest mile at an 8:35 pace.  Total time was 1:53 (a little over 9:00 per mile).  The course is basically pancake flat, so my goal was to run the first half at 9:15-20 pace and the back half in the 8:50 range.  At mile 7, I felt pretty good yet decided maybe staying at +9:00 pace for another mile or two was wise given my fitness level.  In the end, it worked out fine even though I had to hump it pretty good the last several miles to be satisfied with my time.

The one thing I’ll say is that exercising for almost 2 hours doesn’t come easy.  While I’ve recently had hard workouts and several days with two or more workouts, just starting and one thing that long seemed like forever to me.  Six months ago this would have felt like a primetime sitcom in length.  This was good lesson for me.  I clearly need to mix in some long runs even if preparing to triathlon since running will always remain my passion. 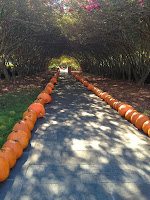 The post party was one of the best I have been to in some time.   The lawn at the Arboretum is constructed like a natural amphitheater slopping towards the Lake.  Dozens of sponsor tents and goodies galore.  They were even serving up 16 oz. Blue Moons among other adult beverages while the band created an extremely festive atmosphere.

As a bonus, retracing my steps from the pre-dawn hours unveiled what seemed to be millions pumpkins.  These were not the small variety, but large and they lined every inch of the paths throughout the gardens.  Even a Pumpkin Village with small structures constructed of…well…pumpkins.  Whether you run or not, hit the Dallas Arboretum this time of year for a real treat. 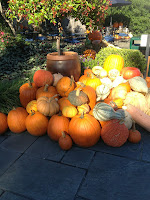 This was supposed to be extremely brief so I’ll conclude quickly.  Just know that this race will be on my calendar for 2014 and it should be on yours as well.

Run in Peace, Rest in Grace
Posted by Randy Runswithacross at 10:23 AM