The last time I ran with my father was at the New York City Marathon in 1998.  When I say “ran with” I merely mean in the same race rather than side by side.  That was our style.  We’d each run our own race and then trade war stories over a beer afterwards.  It seems like we did this for most of my early adult life.  Our level of fitness ebbed and flowed.  There were times when he would easily finish ahead of me and times age won out.  It never really mattered.

Suddenly, we stopped entering races.  I picked it back up in pretty short order, but Pop took most of these past 15 years away from racing and running with any regularity.  There is no need to preach here about life getting in the way of things we enjoy or once enjoyed.  I recently realized that I have been part of the problem.  Opting for longer races, I failed to adjust to an aging man’s comfort zone or maybe better said his enjoyment zone.

That fall of 1998 ended with Pop running his third marathon.  The distance will break you.  It breaks us all.  “I’ll never do that again” has been uttered by everyone I know who has done it.  Yet, for many the pain recedes and we are left with the accomplishment as we stare at the next mountain in the distance.  Nevertheless, there does come a day when finished means finished.  It just happens.

I have no idea if that race was his throw in the towel moment or not.  It is not as though he never took another step or hit the button on his watch.  He gets out the door as often as he feels up to it.  At age 68, I’d say that is pretty good.

This past Sunday was Father’s Day.  Pop and I had joked in recent years about entering a race for old times sake, but that was just talk.  I simply assumed any chance of that were over.  Then, several weeks ago, I received an e-mail from The Run Project about an upcoming 5k - The Must-Dash.  The race was Father’s Day weekend just a few miles from my parents home.  I shot him an invitation to join me.  Within a few days, he agreed to do it.  Soon thereafter, I began feeling selfish.  Running is MY thing.  While I can’t think of a better way to spend a Saturday morning, I’m not the only Father involved.  Maybe he’d rather go for a walk, read the paper, drink coffee and meet for breakfast. 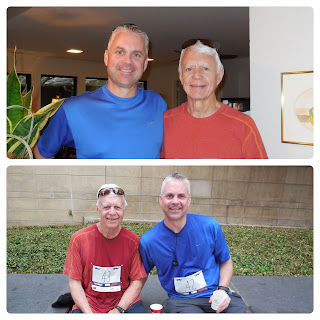 He reassured me he was excited about it.  And so it goes.  We pinned on our race numbers and headed for the starting line.

We ran a race together again and in some ways MY thing became OUR thing again.  I don’t know whether or not it will carry over, but I know this.  It was fantastic.  Recollection of races gone by flooded our memories.  We talked about how we ran, when we struggled and how we could have or should have...

It was the best Father’s Day gift ever (sorry kids).  Once again, my Dad dishes out more than he ever receives.

Run in Peace, Rest in Grace
Posted by Randy Runswithacross at 11:00 AM