This was one of the most anticipated golf outings of the year.  Yes, the 2013 Grapevine United Methodist Golf Tournament.

A year ago, I captained a team of high school golfers (including my son, Parker) to second place.  In “captain” I really mean the guy who paid the entry fee.  Yet, it would be unfair to say that I was not a contributor to that success.  Beyond the funds, I made several lengthy putts.  The green was my only area of contribution, however.  Seventeen year old boys can hit the ball a long way.  Seventeen year old boys who play on the golf team can hit the ball a long way straight. 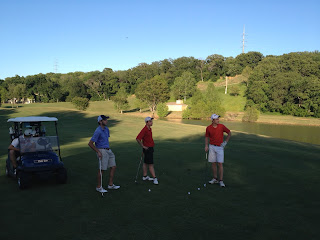 It was about two months ago that Parker asked me about this year’s tournament.  Shortly thereafter, he mustered up the guts to suggest that maybe they needed to take four “A” players in this year…since it was their senior year of high school and all.  This sounded like a great idea until I realized that I was NOT an “A” player and the phrase “they needed” and “A” player was not “we needed”.  Yes, it is true.  My own son kicked the Team Captain, his Father, his Key to Economic Survival and his Inspiration off the team.  How do you get kicked off a church golf team?

This was another teaching moment that needed to be explored.  I could have cried, complained, refused to quit or given him the silent treatment for a few decades, but no, I took it like a man.  I wanted to show him how to handle disappointment.  I’m sure the first time he gets fired from a job or deserted by his wife, he’ll think of me and how I handled being sacked.

So here’s the kicker.  In a redemptive effort, Parker asked me to remain the coach/captain….and sponsor.  I’ve never been more proud!

I’m happy to report that “Our” plan worked.  It turns out that four 18 year old “A” players can shoot 18
under par in a scramble and win by 5 strokes.

The room was full of old and medium geezers who could only clap and silently accuse the boys of cheating as the winning team was announced.  I got to act like Mark Cuban or Jerry Jones and take all the credit for my general managing skills and ownership abilities to field such a remarkable team.  Nobody likes and arrogant owner, but I had to play my role.

Afterwards, one of our daughters asked Parker what he had won.  He told her and then made sure to point out that it was not about winning a prize.  It was about Victory!

After 10 years of playing in this tournament, Parker finally had his victory….and so did his dad.

Posted by Randy Runswithacross at 11:11 AM