Does it ever get any easier?  The Hogeye Marathon was this past Sunday in Fayetteville, Arkansas.  Since my oldest daughter is attending The University of Arkansas, I have been able to spend a little time in this neat college town.  When I discovered there was a marathon, I put it on my calendar as a possibility.

As stated in earlier posts, I wasn’t thrilled with my training.  Without question, I have said that before and after every marathon.  I consider myself a pretty good hill runner for living in largely flat north Texas.  Yet, this race was something I have never had the chance to experience.  There are hills and then there are steep hills.  These are a different breed all together.  I wouldn’t tell anyone to avoid the event though.  If one is mentally prepared and physically puts in more hill workouts, it is a great challenge.  Just do not anticipate a PR and prepare to suffer a bit.

The course starts downtown, runs through campus, then north around Lake Fayetteville and back toward the entertainment district downtown.  Fayetteville is pretty and downtown has a quirky coolness to it.  Visually, it is a great track.

One thing I knew, but didn’t think much about was the size of this race.  With about 300 marathoners and 800 or so half marathoners, I’d consider this quite small.  I’ve run the biggies and after RNR San Antonio last fall, I decided I would avoid the mega-marathons.  Here there were no corrals or pace signs.  Folks just sort of hung around the starting area for the national anthem and then the race director yelled GO.  Everyone politely filed over the timing mat and began running.  Cool, just like the old days when I started all this nonsense.

The volunteers were great as you might expect.  When I read that there would be an aide station with water and sports drink approx. every mile, I assumed this was a rather large exaggeration and simply unnecessary.  On a hot and windy day, these were such a welcome sight.  I think fewer stations late in the race would have resulted in many DNF’s (mine in particular).

I tried to reserve energy by walking a lot of the steep hills early.  This effort helped me keep pace for the first 11 miles.  Soon I wanted to pick it up a bit and simply could not.  After a minor calf cramp warning twinge, I remained slow and focused on fuel intake.  I was able to fend off the cramps all day, but this left me fatigued and slow with a mild upset stomach.  The final six miles progressively saw more of me walking.  I think my blood pressure was up and I just felt crumby. 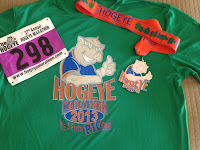 Happily, I finished.  This was one of my slowest times at 4:42, but given the hilly course, weather and fitness it was a solid effort.  It was also a milestone for me.  10 marathons completed.  Hard to believe I ran my first one over 15 years ago.  I suppose I go through periods in which I’m simply not mentally strong enough to take on the task.

Good treats in the finish area.  Nice metal and shirt are good quality...though I’m not real keen on the big HOG.  Not sure this Longhorn can be caught wearing that. 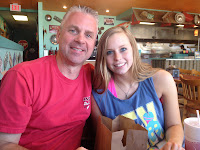 The best thing of all was having a late lunch with my daughter and her roommates.  Big cheesy burger and cold beer were excellent for my soul.

The question I always ask myself is “will I be back?”  The answer is yes.  I’d like another stab at the marathon, but may opt for the half until the memories of the hills fade away.  Plus, great excuse to visit my daughter.  Thanks Fayetteville.  Great event.

Posted by Randy Runswithacross at 5:31 PM