I am a victim I tell you…a victim.  A few weeks ago I put out the Christmas lights.  Nothing fancy, just lights in the bushes and strings of larger bulbs on stakes outlining our elevated landscape beds.  This display is not impressive, far from what I did many years past, but it sufficiently puts one in the Christmas spirit driving up at night.

After returning from a run one evening last week, I noticed that some of the bulbs had gone out.  Not a huge surprise as eleven months in the attic would take the luster out of me as well.  The next morning while getting the paper, I realized that I was wrong.  The bulbs had not burned out.  In fact, there were four bulbs missing.  Missing completely.  Not shattered or broken or dead.  They were gone.

My first thought was that my daughter’s friends were goofing with me.  Teenage boys are terrorizing our house (well, actually just visiting and quite polite so far) seeking the flesh of my daughter like zombies.  Oh the kids these days!  I told my wife and daughter about my theory of the guys playing tricks on us or just being mean.  As usual, they told my I was overreacting and the boys being involved was highly unlikely.

I dropped the issue and went on a mission to find replacement bulbs.  They’re blue…not just any BLUE…they are called Pure Blue.  Why didn’t I just get white like every other light we own?  No Pure Blue at Lowe’s or Home Depot.  ‘I know, I’ll just order them.’  Amazon…no.  Google search…huh…no Pure Blue C7 5-watt GE bulbs…anywhere. 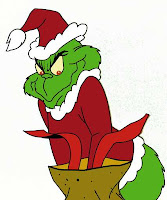 My theory began to change.  Maybe someone stole them.  Maybe someone with Pure Blue lights on their house needed to replace some bulbs.  Surely not.  Who would steal my light bulbs?  They ARE easy to get to and a quick drive or walk by late at night would allow one to pluck those suckers in no time at all.  Maybe the Grinch is back to being the Grinch.  Maybe Cindy Lou Who and the rest of Whoville kicked him out of town and now he is reeking havoc in Grapevine, Texas.  Maybe, just Maybe.

Why? I can only surmise that they don’t make them anymore and some guy’s wife was giving him a hard time about replacing them with Aqua Blue, Ocean Blue or Sky Blue.  “It just doesn’t look right.  You need to….”  The only way to shut her up was to steal Pure Blue treasure from me.  Well, I feel your pain brother, but you could have at least asked. I would have surrendered them to a brother in need.  I wonder if he’ll return them after Christmas.

So as I run in the evening, I’m searching for Pure Blue lights.  So far, I haven’t found them, but I will and when I do…I’ll do absolutely nothing.

Run in Peace, Rest in Grace
Posted by Randy Runswithacross at 12:01 PM