On Sunday, June 10th, I ran in the Wounded Warrior Half Marathon in nearby Las Colinas.  I signed up for this in early May thinking I would squeeze in one more event before the heat of the summer.  It was in the mid-to-upper 70’s at 7:00 AM.  Humidity was normal (pretty high) with little or no wind.  About what I expected when signing up.

My plan was simple.  Survive.  I really struggled in my last race with heat.  I did not want to be near death at the finish; running aimlessly without any ability to control the pace.  This plan called for going out with a 9:45 or so pace and hold that for the first half at least.  At mile 6, I would adjust based on feel.  Walk for a minute during EVERY water stop.  Take a lot of fluids and supplement it with gatorade and gels.  I’d run this distance a lot in the past three years and my fluid and fueling is pretty routine. 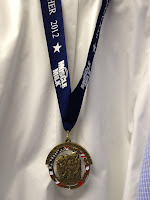 I only have one complaint about this race.  The paved paths we ran were simply too narrow for the number of runners.  The first three or four miles were way too crowded.  I think the solution is a much narrower starting shoot rather than a street three times as wide for the first half mile.  Folks are getting comfortable being released in waves.  The race would have benefitted from this certainly.

I’ve run literally a hundred or more road races in DFW.  This is the first time I’ve been on these paths.  Really cool.  It seems like they go on forever.  I wish I lived a little closer.  I’d run these a lot…except having no visible water fountains it would be a great place to run or ride.  If I ever actually follow through on my vow to start cycling, I’m headed to these paths.

I followed the plan for the most part.  Actually, I was slower with the early congestion and had to really slow down or stop at a few water stops to get enough water.  Since when did they start filling 8 .oz cups with 2 ounces?  It is so common lately.  Could it be they don’t want folks wasting it?  I feel like a hog taking two or three, but in these temps you cannot skimp on fluids.  It is deadly. 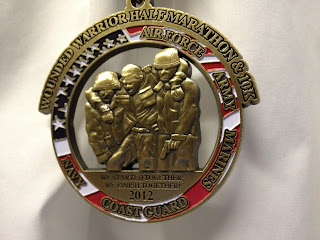 That being said, this was my slowest time in a half marathon EVER.  I looked back and found a 2:06 in Waco (January 2011) at the Miracle Match, but that bad boy had some serious hills that zapped my legs.  This dude was totally flat.

Regardless, I’m glad I ran the race and will probably do it again next year.  The event was well organized.  Had a great band at the finish and plenty of volunteers braving the heat to hand out goodies during and after the race.  The money raised benefited the wounded warrior fund and I like that there is a worthy cause behind it.  Takes some of the sting out of my slow time.  Heck, I have to run it again next year.  It is a great gauge to my fitness level given the heat.  One needs to race in that weather occasionally so that you can be prepared on how to adjust.  Excellent event and good experience.

Run in Peace, Rest in Grace
Posted by Randy Runswithacross at 11:47 AM