Through the Eyes of My 14 Year Old

Sometimes what you think your kids think about you is completely wrong.


I was preparing a presentation at home a few nights ago for several hours. This wasn’t a normal presentation, it was a really important one. It concerned the future of my employment in sort of a loose way. If I blew it, there would be no immediate consequences. Yet, it would present our business in a less than positive light and could ultimately lead to me and most of my employees getting the boot. The pressure of the employees future concerned me most. So this was pretty big.


In addition to preparation, I prayed about it often with the minimum hope that I could deliver it with confidence and not pass out or projectile vomit on my audience.


My youngest daughter, now all of fourteen years, came in to say goodnight. She asked what I was doing.


“Getting ready for an important presentation on Thursday.”


“Is this for your work?” she asked


“Yes, it is sort of important so I’m going over it until I know it really good. Kinda like you do with your routines. You guys practice those what, a million times?” I said as if she needed me to relate it to her life to get the enormity of this thing.


I told her ‘thank you’ and gave her a big hug. She didn’t mean it as a pep talk, she simply meant it. I’m not sure exactly whether being a “good talker” is actually a compliment (I would normally lean toward NO), but in her world it probably would be.


All this time, I thought my kids considered me just a dorky dad who dresses funny, lectures way too much and falls asleep on the couch a lot. Little did I know that they thought I had a talent. As simple as it sounds, being a good talker is probably pretty accurate. While I’d be talking in a structured format, it was still just talking. If I treated it as such, maybe it wouldn’t be so bad. Actually, maybe it would be at least…dare I say it…. average.


I also realized that this type of response or encouragement from her comes pretty naturally. My wife and I encourage the kids in everything they do. Not unlike most parents, we are always telling them the can when they think the can’t. Well, within reason mind you. She was just repeating something that she has heard all her life. Sort of makes me think I haven’t messed up this parenting thing after all.


Oh, and that presentation..she was right; I did good.


Rest in Peace, Run in Grace.
Posted by Randy Runswithacross at 2:08 PM 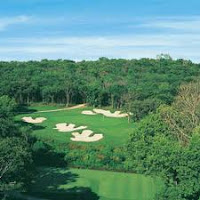 I had the pleasure of playing golf with my son and two of his buddies yesterday in our annual church golf tournament.  These young men have grown so much.  They will soon be finishing up their junior year of high school.  It is so hard to believe that they’ll be preparing for college in another short twelve months.

But hey, enough of the mushy stuff…let’s get back to the golf.  Did I mention these guys play for the high school golf team?  A low handicap combined with raw power is a perfect combination for a golf partner in one of these scramble tournaments.  It is even better when you have three of them on your team.

These guys are playing a game that I am not familiar with at all.  They are fearless.  The sound of the ball off the club is like poetry.  Distance, pure distance.  Their soft touch around the green is shocking given the violence of the rest of their games.  It is hard to imagine how much more they will improve with another year of playing golf nearly every day.  I was clearly holding them back.

In last year’s tournament, these guys fielded their own team with four high schooler golfers.  At 16 years old, they finished second.  They were not accused of cheating, but I imagine some in the crowd wondered how a bunch of kids who could barely drive could score so well.

Going in this year, finishing near the top was not even considered since I was on the team.  Oh well, the boys could mow down a lot of groceries and show off for the volunteers.  I’d just sit back, knock in a putt or two and enjoy the day.

After birdies on six of the first seven holes, you could not hold back the competitive beast.  These boys wanted to win.  We hit a lull for a few holes and it became clear that the young men needed fuel.  I loaded them down with hot dogs and sports drink at the turn in hopes of recovering their prior form.  It worked.  We were off on another birdie binge and finished eagle, birdie, birdie.

The final score tally was 58 (14-under par).  Not incredible for a golf scramble, but excellent for a church golf scramble.  Nothing against us Christians, but church tournaments don’t tend to bring out a lot of scratch golfers seeking prizes.  It’s a fundraiser for gosh sakes.

We’ve come a long way since the boys and I played several years ago in this event and finished last.  Instead of the booby prize, we received a set of golf wedges.  Only real golfers get good gear.  I got to tag along for the ride.

On the way home the boys were already planning for next year.  What mistakes were made this year and how those could be corrected.  It was also suggested that I merely be a manager and they recruit another ringer for finish out their foursome.  Should I be offended?  I mean, I paid for this thing…geeze…a little respect is in order don’t ya think?  Ok, maybe not.  But, I don’t think I’ll allow it.  It simply isn’t fair is it?  It isn’t about winning…you can’t even use the “It’s about winning for God” argument.  That is way too convenient and down right silly.

No, We’ll field our team just like everyone else and enjoy the day outdoors chasing a little white ball.  It’s about fellowship with other believers.  Ok, headed to the range to start practicing.  Someone’s got to win…right?

Run in Peace, Rest in Grace.
Posted by Randy Runswithacross at 4:44 PM