Saved by a Sponge

On April 1, 2012, I ran in the Half Marathon at A2A (Arbuckels to Ardmore).  I am writing this three weeks later because it has taken me that long to recover.  I’m disappointed.  Without looking back to my 2010 race report, I can already tell you it was one of my all-time favorite races.  I ran well and the entire event was excellent.

The problem this year had ZERO to do with the organization, the course or the people.  First class all the way.  I love this race…I really do.  The volunteers remain the best crew I’ve ever experienced.  The two hour drive from home is easy to pull off race morning with an 8:00 start time (even though you have to be there to get on the bus by 7:00 AM).  There is no reason I shouldn’t run this every year if my race schedule allows.

As a refresher, they bus you up to the Arbuckle Mountains due north of the finish at Noble Stadium in Ardmore, Oklahoma.  The first half of the race is downhill and then it is just gradual rolling hills the rest of the way. 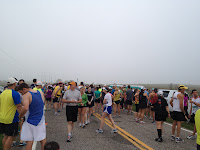 In 2010, it was chilly with a strong wind out of the north (ie. tailwind).  This year…well, how about warm…really warm.  Humid and in the high 70’s - low 80’s during the race.  It was soupy and the visibility was limited.  Add the southern (head) wind at 10-12 MPH and you’ve got a tough conditions on your hands.

I have to admit that I started out a little too fast with the downhill portion of the course.  I ran so well a month earlier at Cowtown, I figured I’d be able to hit the finish at 2 hours and figured I’d better take a little bit of the time early.  Always a bad strategy.  It NEVER works and the weather was just another reason to throttle back instead of throttle up.  To put it simply, I ran stupid.

By the 6 mile mark, I could tell I was not fairing very well in the heat.  While I had almost doubled up on the fluids, I was sweating like crazy.  By mile 8, folks around me were walking a lot and the body quit responding to requests for more speed.  You know you’re in trouble when you decide to pick things up and cross the next mile marker slower than the previous mile.  It basically kept happening.  I’m trying to speed up and my body is doing the exact opposite.  Rarely have I dialed up speed and failed to respond. 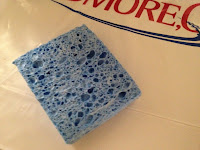 Since I had plenty of fluids, I wasn’t too worried about dehydration or heat stroke…though I did get a chill at one point.  Running in Texas, this isn’t completely uncommon and you learn to slow a bit and triple up on the fluids for a few miles.  Nevertheless, if you are new to running or feeling this experience for the first time, please seek medical attention or at least start walking.  When your race is shot, there is no reason to push it.

My run was saved when at mile 9 or 10, a lady handed me a sponge soaked in cold water.  I squeezed some of the water on my head…then rather than throw it to the ground, I put it under my shirt on top of my shoulder.  At remaining water stations, I’d give it new life with fresh water and then moved it over to the other shoulder.

I kept moving it from shoulder to shoulder and it somehow made me feel cooler.  It was like magic.  I’ve seen it used in Ironman events, but never had I thought to put it into practice until that morning.  Brilliant. 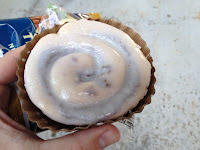 Most folks around me were really struggling.  They’d try to hang with me when I passed, but routinely fell off the pace.  Don’t be impressed, it took all I had and I was still moving at near crawl speed.

In case the above is not clear, it was brutal.  Clearly some of the most difficult conditions I’ve run for a half marathon.  White Rock in December was in the cold rain…I seem to recall that sucking pretty bad, but that was months ago.  It is always the most recent torture that is the worst.

I crossed the line in 2:04.  Slow for me considering I ran a PR in October on a hilly course and ran a really tough course a month early for a 2 hour finish.  Nevertheless, I came away thrilled with how I was able to adjust and hang on.  Once I got my act together and ate some food (including an amazing warm cinnamon roll), I was very content.  The time simply didn’t matter. 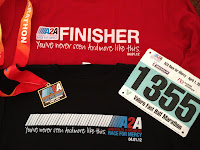 It is a great reminder that you can’t always judge a race by the finishing time.  Sometimes the slowest races are the most memorable.

Run in Peace, Rest in Grace
Posted by Randy Runswithacross at 9:02 PM