What On Earth Is He Talking About?

While filling up with gas in Atoka, Oklahoma, a guy walks by me and says, “Alabama next week, should be a tough one.”

If he wasn’t looking straight at me, I would have thought he must have been talking to someone else. It was clearly intended for me. Thus, I nodded and said, “yep.”

I had no idea what this meant. Did he think I was someone else? Was he nuts? What do I make of this? 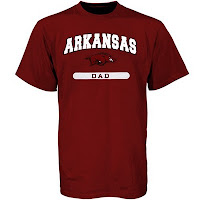 Soon, I looked down and noticed I was wearing an Arkansas Razorback t-shirt. Something I have never done in my life.

I quickly recalled that Arkansas plays Alabama next Saturday in college football. Oh my, the idiot was me! I laughed at myself and realized what goofy look I must have had on my face. Poor guy was just trying to be nice and make casual conversation. Hey, what can I say...I’m a bonehead.

I’ll write a full report on our trip over the next few days and post it with some photos.

Run in Peace, Rest in Grace
Posted by Randy Runswithacross at 2:34 PM

Who Do You Think You Are?

We're up visiting our daughter at college for Parent's Weekend. Due to the massive infusion of visitors, we had to book a hotel a notch or two below our normal spot. Still, clean and you get what you pay for in cases like this.

They do offer a complimentary breakfast. Nothing special, but hey...it's free! After my run, I roll into the dinning area to hear a lady complaining that there wasn't any bacon. "But I want bacon," loudly stated to no one in particular. I quickly looked the other way in an effort to insure that I did not get engaged in Bacongate.

She follows my lead to have a glass of OJ. Soon, she is rejoined by her husband and starts complaining loudly about no bacon. Apparently, the orange juice didn't meet her approval either. "It looks orange, but tastes like water." The poor gal refilling the "FREE" breakfast (yes, we paid for the hotel so I guess it wasn't really free) was talking to her trying to find a way to satisfy her complaints.

The lady asked to see the manager. He arrives and she begins to ask why they don't have bacon. Of course she compounds things by talking of watery juice and cold coffee. I was embarrassed for her and her husband. My only option was to get the heck out of there...leaving quickly to go back up to my room.

What did she think...she was staying at the Ritz? Geeze, Seriously? Is this how you treat people? That is not very Christlike. The breakfast wasn't terrible...it wasn't good. That is not the point. The employees don't control what they are given to serve and one has every right to make a complaint...just don't do it in a manner that takes it out of helpless people in front of dozens of other customers. Classless...sorry, just classless.

I encourage you to treat others like you would want to be treated. Oldest rule in the book, but too often forgotten.

Run in Peace, Rest in Grace
Posted by Randy Runswithacross at 10:29 AM

I have been running for about 20 years. While I’m sure I’ve tripped before, I simply don’t recall a serious tumble. Well, it happened on Saturday morning’s run. Near the end of my seven miles semi-long run, I was approaching a group running the opposite direction. I politely got over to the far right side of the sidewalk and proceed to trip on some unknown object. While I tried to save it, there became little doubt that I was going down. With this knowledge, I lunged to my right off the sidewalk and sort of side rolled onto and over my right shoulder into some bushes and a wood fence.

Wow, that hurt. By this time, the runners coming my direction were there fetching me out of the landscaping. They were very nice and showed ample concern. All I could do was say and act like I was fine. I really just wanted to get the heck out of there. I was so embarrassed that I wanted to fade away from their memory quickly.

After thanking them for their concern, I took off toward home. I was doing an inventory and realized I wasn’t seriously injured. Looking down, I could see I was covered in dirt and blood trickled from my knee and ankle. I was clearly running with a limp, but I wanted to get far away fast. Soon I noticed that one of my water bottles had fallen out of its’ holder when I went down. Great...so now what? Well, I turned around and ran back through another group of runners to the scene and retrieved the bottle from the bushes.

I cleaned up after I got home. Things didn’t look bad and I’d just be a bit sore for a few days. The most lingering pain is in my bruised shoulder.

Make no mistake, the whole thing was actually quite funny. I wish I had a video of it to post. I mean, I must have looked totally helpless flailing though the air. It seemed like slow motion. It felt like slow motion.

When I told my wife, she simply laughed. I then pointed out my injuries and she gave me some fake sympathy while holding back giggles. “What a sight you must have been.” Surely my daughter, a notorious wimp, would show some concern. Nope, she laughed and asked me if I was embarrassed for falling in front of a crowd near a busy street.

Well, the reality is that is was funny since I was not injured. It was embarrassing as I know I’ll run across these folks next weekend. Yet, I’m reminded that it is important to laugh at ourselves as often as possible. Why take yourself so seriously? Have fun. Laugh a little. Just watch out for the bushes.

Run in Peace, Rest in Grace
Posted by Randy Runswithacross at 4:25 PM