Let's just start by stating that life at my house is basically chaos.  The three teenagers are in constant motion. I am so blessed that my wife can keep up with their schedules.
About two weeks ago I walked into the house one evening to the most shocking sight I can ever recall.  Sitting together in the living room were my wife and three kids watching baseball. BASEBALL?  BASEBALL! Certainly I must have been dreaming.
My wife began complaining about strike calls and close plays at first.  What?  This didn't really happen.  Strategy about pitching changes, stolen bases and intentional walks were discussed. I have been speechless since mid-October when they caught baseball fever.  Questions about the designated hitter and who has home field advantage replaced our typical conversations about unimportant stuff like school work, boyfriends/girlfriends and pizza.  Who were these people?

The family went shopping and purchased team merchandise to show their support for the team. This really couldn't be happening.  Other area teams have never penetrated the steel curtain to garner even a minute of their time.  We were truly pioneering with this newfound family baseball passion. 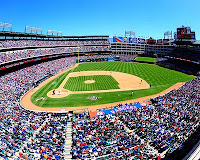 I've been a Texas Ranger fan since my youth.  Decades of disappointment never had me love them any less. This was baseball and they were my home team.  They didn't owe me anything. Nevertheless, the Rangers gave me a gift more special than a World Series.  They gave me three weeks with my family.  Three weeks like none other.  The five of us bonding together watching our national pastime.
When they lost the Series to the Giants in Game 5, I was obviously disappointed.  Disappointed that this special time was now over.  I doubt we'll ever be able to recreate the magic.

I'm simply thankful for the moments together.

Run in Peace, Rest in Grace
Posted by Randy Runswithacross at 4:16 PM

In 1998, the New York City Marathon was run on Sunday, November 1st.  It was just my second marathon and first BIG marathon. My Dad was running with me.  He had run the race a few years earlier and insisted that we stay in Staten Island at the Staten Island Inn the night before the race to avoid the early wake-up call, bus trip from Manhattan and long wait outdoors race morning.  If you've run it...you know what I mean...if not, I hope someday you will.
Dad and I left our wives Saturday afternoon to hop on the Staten Island Ferry.  We arrived in Staten Island only to figure out that cabs were not as plentiful as in Manhattan.  We were reminded by a local that it was a big night.  Being so caught up in our own "marathon" world, we had simply forgotten that it was the dreaded double combo.  Saturday night...and Halloween.  A big night indeed.  We found a pay phone (yes, 13 years ago there were still pay phones) and called a cab.

It was dark by the time the taxi showed up about 30 minutes later.  I don't have to go into detail about cab drivers.  We don't get much experience in Texas, but I've traveled enough to big cities to know that we had a real doozy on our hands.  Talked a mile a minute.  Watched the road only when absolutely necessary.  Drove a fast as possible...and fast was possible.
Remember, it is Halloween.  We're on the uncongested streets of Staten Island.  This was not bumper to bumper traffic filled with honking and swearing that you find elsewhere in the City.  This was straight out of a car chase scene in the movies.

Halloween means Trick-or-Treaters!  Little kids walking the tight streets darting back and forth as we took temporary flight at each intersection. Pop and I traded white knuckle glances upon each landing and scrambled for seat belts.  I could only think 'Surely, we will die tonight...or worse...be a passenger in a vehicle that killed a pack of innocent trick-or-treaters out for their annual pilgrimage to gather the youthful gold standard.  Oh the horror!
Upon arriving safely at the Staten Island Inn, the cabby kindly asked if we needed him to come back in the morning to take us to the start line.  We quickly refused the offer and sent him on his way.  I was willing to run a few miles if I had to in the morning...if I was going to die, it was not going to be in a cab on the way.
To this day, I have very few memories of Halloween.  This one...will stick with me forever.

The next day Pop proved he was faster than me once again.  What an amazing thing to share with family.
Good luck to all running the NYC Marathon this weekend!

Run in Peace, Rest in Grace
Posted by Randy Runswithacross at 3:59 PM