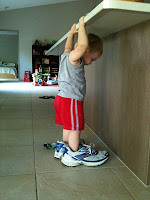 Years ago the recreational runners started to buy into the theory that it was good to have a couple of pairs of shoes; alternating these for your runs. The benefits range from injury prevention to less odor. Because I can, I've expanded that and believe this method is becoming more common based on the runners I speak to about the subject.

I generally have three pairs in my rotation. These are not just any three pairs, they are three different brands and/or models. I believe this further diversifies the wear on your lower body and prevents injury as different brands and different models simply are designed to be well...different. And unless your sponsored, you might just discover the best shoe you otherwise would never have tried. Note: these shoes still must be the right style (stability, cushion, motion control or whatever you where), but mix it up a bit and I think you'll remain injury free...from the shoes at least.

Also because I can, I don't wear them until they are completely worn out. 250 miles; maybe a bit more or sometimes a lot less if they just don't feel right. I like to reward myself with new gear and new shoes are always a treat. Plus, donating shoes that have life left is wonderful if you can afford it (I recommend Soles 4 Souls   - click on link for drop locations near you or to make a financial donation).

One of these pair graduates to my long run/marathon shoe and gets used almost exclusively for that purpose once they've been sufficiently broken in (50-75 miles). The other pairs may never achieve such status if they just don't feel right on those mid-length runs. The idea is to rotate a high mileage pair out and roll in something new....so you are only breaking in one pair at a time. Not always possible if you short range a shoe or your mileage gets a little out of whack.

Anyway, that is my take on shoe rotation and gives a shoe horse like me an excuse to try the newest pair.

Is 'Ever After' Too Long?

With the recent split of former Vice President Al Gore and his wife Tipper, the world seems to be focusing on how divorcing after 40 years of marriage is become more common and more acceptable. Yesterday's Wall Street Journal had an article entitled "'Til 40 Years Do Us Part". 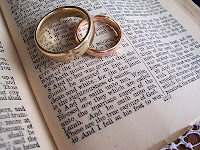 In it you can read nonsensical gibberish such as:

'marriage was designed for a time when people died in their 40s and 50s, after raising children together'

'we have to ask ourselves: Is 'ever after' too long?'

I suppose I should give them some credit for devoting the final two paragraphs (2 out of 14) to the idea that it is possible to stay married.

My wife and I will celebrate our 20th wedding anniversary in August. So, what do I know about staying married? Nothing beyond 20 years...assuming we make it until August. I am not qualified to give marriage advice, but that never stopped me before.

I see what happened to the Gore's happen around me and always wonder...what happened? Forgetting infidelity (which is a deal breaker), how do you go from being best friends as newlyweds to despising you spouse's company?

It is really pretty simple in concept. Selfishness. Putting one's life above another. I deserve more. I deserve better. What I want or need is more important...he/she just doesn't understand. It doesn't start when the kids graduate high school or when you turn 50. It starts early in a marriage and requires only one spouse to get the ball rolling in the wrong direction. Resentment and anger ultimately lead both parties to start looking out for themselves.

Don't be that spouse. God didn't design marriage to be temporary. 'Ever After' is not too long.

I admit it is very complicated because people do change. Many of you are new runners...or fairly new. Think of how that has changed your life and your priorities. Those changes impact your marriage so be sure to acknowledge that and adjust accordingly.

Communication is key. I often express to my wife that I worry about our life after the hustle and bustle of the kids is no longer there to consume us. She thinks I'm crazy, but knowing those years are not too far away makes me work even harder to make sure the two of us have a life aside from our children.

Run in Peace, Rest in Grace
Posted by Randy Runswithacross at 10:27 AM