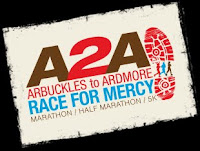 I was blessed to have run the Inaugural Arbuckles to Ardmore Half Marathon (A2A Marathon)this past Sunday and set a new personal record (PR) by almost two minutes. This race popped up when searching for a Spring marathon to keep me motivated after running Dallas White Rock in December. Fearing that I might get lazy after my next marathon, I opted to do the half and save myself for one last full marathon later in the Spring. I'll separate this report into two sections: The Event & My Race

First, I want to say this was possibly the best organized event I've run in over a decade. It was simply a blast! I drove up the morning of the race. Packet pick-up was a breeze. The people were amazingly friendly at 6:30 AM...a trait that never waned the entire day.

A weather report is in order. Very strong winds out of the north made the 47 degree temps seem especially frigid. 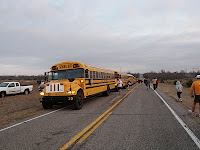 The race is point-to-point and they had school buses lined up to take the marathoners and half marathoners up into the Arbuckles for the start. Our bus driver on the #25 bus was wonderful. Rather than run buses back and forth to pick-up more runners, they had enough buses to let us stay onboard until 7:45 (15 minutes prior to the start). Folks rotated off and on the bus to use the bathroom or hand off their drop bags. Runners are friendly people and even friendlier if happy. 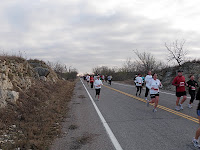 The race was advertised as being largely downhill with 531' of elevation drop in the first 8.5 miles of the half marathon course. This fact and the stiff tailwind made this an extremely fast race. While the course did have some rolling hills, there were many times when I could feel the wind simply blowing me up the hill.

Water & sports drink were provided with aid stations at nearly every mile. Is it possible to have too many stations? Since the race is largely run down rural Highway 77 there was little crowd support. Nevertheless, the aid station volunteers were enthusiastic and always ready with a smile and encouragement.

Once in town, the race moves back east and north toward Noble Stadium. The quarter mile run into the blustery wind during the last mile was a great reminder of how fortunate we were that day. Once in the Stadium we lapped the track and finished at the 50-yard line to a surprisingly large crowd in the stands.

I could go on all day about the wonderful people. When I told people "thank you for being here and volunteering", they each said "no, thank you, we are so glad you're here." So, maybe they were trained to say that...who cares. It felt genuine. 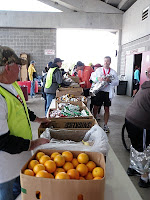 Nice Medal, Finisher's Shirt (technical), T-shirt (long sleeve cotton) and Food, Food, Food! Besides the usual fluids and fruit, they went all out. Chicken wraps? Cinnamon Rolls? Come on....that is just too awesome. Later...the cranked out the BBQ, chili and who knows what else.

Again, this was a special event and to pull it off on the first try was something special. Thank you Ardmore, Oklahoma.

Now, I'll state it here and move on to my performance...if the wind had been out of the south, this report may have a slightly different tone. I can't promise that I would have been able to joyfully observe the volunteers and community if I'd spent 2 hours getting beaten into submission with strong winds. So when I say at the outset the I was blessed to have run the race, that blessing included the weather. 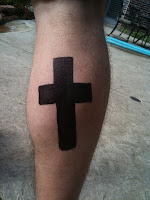 I have purposely ignored the term PR since turning 40 a couple of years ago. In these recent years, I have focused on running negative splits and trying to finish feeling comfortable. I took several years away from running seriously after abusing myself pursuing a marathon time that I had no business pursuing. The agony of the the event stuck with me and I swore I'd never run another one. When I did return, I vowed that I would run within myself and run to finish. To enjoy the moment and let the kids and newcomers stress themselves pursuing meaningless seconds and minutes.

Unfortunately, I suppose the hiked skirt of a new record is like any other temptation. As outlined above, the downhill course and tailwind made for ideal conditions to push for a PR...if only by a few seconds. The plan was to go out with 9:30 pace for the first half, run 8:45 in the back half through 11 or 12 and then pound 13 to get me below my previous best time of 2:02:38 from 3 years ago.

Well...the wheels shot off the plan within the first half mile. With the strong winds, 9:30 pace just felt too slow. I assumed I could drop to low 9:00's and hold it without expending much additional effort due to the conditions. So I ran between 8:50 and 9:10 for the first 9 miles. It felt fairly good, but I could tell the finishing kick I had at Cowtown (low 8:00's for final 3 miles) was not available on this day. The faster pace took much more out of me than I expected...or maybe it was just one of those days. 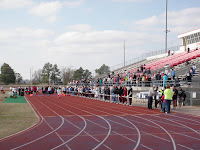 Finished with a strong mile 13 (8:40), but the last tenth measures mysteriously .28 on my watch. I knew I had the PR and was sure I was going to be under the two hour mark as well. I actually coasted mile 12 not wanting to go too low and put this day's PR out of reach for a lifetime. They called my name over the loud speaker in the stadium which is always fun to hear. As I rounded the last turn on the track, someone yelled for me to hurry to break two hours. Hurry? Then I saw the clock....oops. I needed to bust it because I knew this might be my only chance to break two hours. Dead sprint to the finish...well sort of. 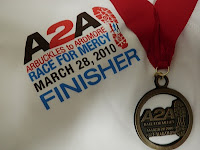 I did it. The old man did it. What a thrill. I haven't walked that tall in years.

I'm still sore and dreading the 20 mile training run I have in the morning in preparation for the Oklahoma City Marathon, but maybe I was wrong. Maybe I can occasionally chase meaningless seconds and minutes after all.

Run in Peace, Rest in Grace
Posted by Randy Runswithacross at 10:20 AM