After the Cowtown Half Marathon, I immediately went over to participate in The Hour to Help Haiti put on by Ministry Milers.  The concept was easy, cover as many miles as possible for an hour to raise money to help in the Haiti rebuilding effort.
Before we began, folks were sort of teaming up by pace so that larger groups could run together and there would be some pace leaders for the many youth that turned out.  I thought I'd run alone as I was unsure how I would feel an hour and a half after running 13.1 miles.

After the start, a young man ran up beside me and asked if he could run with me.  "Sure."  He introduced himself as Kevin.  I told him my name and that I wasn't sure how far or fast I could go, but that I'd like the company.  After about a mile at a ten minute pace, Kevin surged ahead for the first time and promptly had us running under 9 minutes per mile.  I was thinking 'OK kid, I just ran a half marathon and you were probably playing video games.'  The pace didn't last long, but this kid was focused.

It turns out that Kevin is 14 years old, an 8th grader, and had run cross-country the previous year.  Huh, why did he have to pick me to run with?  He had an undeveloped stride, but tremendous desire.  Questions about my running and racing came as though I were talking to an adult.  Kevin, indeed, is a runner.

Having never covered more than a few miles, he stopped at mile three and told me to go ahead.  I welcomed the excuse to walk and told him I'd stick with him if he didn't mind.  We decided to walk and run as best we could for the remaining thirty minutes.  Kevin would say things like, "we'll start running again at that tree."   We'd reach the tree and off we'd go.

We ultimately covered 5 miles in our hour together.  The look of achievement on his face was amazing.  It is the farthest he'd ever run and his smile was better than any finisher's medal or t-shirt I've ever received. Kevin simply inspired me.  Not to run faster or run farther. He inspired me to be a runner with passion.

Run in Peace, Rest in Grace
Posted by Randy Runswithacross at 11:23 AM

The 2010 Fort Worth Cowtown races received some criticism in today's Dallas Morning News.  It highlighted how the leaders of several of the races were led off course briefly. It only impacted the results (winner) of the Kids 5K according to the article, but clearly caused some panic and distress to many competitors.  DMN Article

I ran the Half Marathon and have purposely withheld a review because I'm really torn about my experience.

First, let me be clear...I enjoyed my day thoroughly...this is not intended to be hyper critical, but to point out something that is becoming a problem in many races.

I ran Cowtown 18 years ago as my first event ever. This 10K was run with the Start/Finish at the Fort Worth Stockyards. Obviously, the event hooked me on running.

The event was moved downtown to accommodate more runners.  The problems of the weekend simply demonstrate what happens when a race gets too big.  Big races have their place. I've run the New York Marathon twice and would run it again in a heart beat. It is unfair to compare the two events.

I personally think Cowtown suffers from too many races, more than too many racers.  The Marathon, Half, Ultra, 10K & 5K all have slightly or largely different courses. This puts a strain on traffic control.  No wonder they went off course.

It also puts a strain on support.  I was told the number of volunteers was amazingly high.  Unfortunately, they were just spread too thin. Water stops to the very end of the Half were understaffed...some badly so.  Friends who ran the Full or Ultra reported similar or worse issues.

I'm saddened to even write this. This is my hometown race. I've run Marathon, Half and 10K countless times. I'm certainly worried that a first timer or an out of town visitor came away feeling let down.

Cowtown is not alone.  After the Dallas White Rock added the Half and Relays, similar issues popped up and remained when I ran there in December.

Fort Worth gets things right. It just does...look at Dowtown Fort Worth...a model for cities worldwide. I'll be back next year. The course is just too great and the city is just too fantastic to not participate.

Sadly, I really need to ask myself why I have run that race so often yet not been a frequent volunteer there.  It obviously takes more in the current format, maybe I'll just be one of them next year.

Run in Peace, Rest in Grace
Posted by Randy Runswithacross at 4:33 PM

While celebrating my birthday at the office last week, my 77-year-old boss dropped this piece of wisdom on me:

"Life is like a roll of toilet paper, the closer you get to the end the faster in goes."
I searched for the originator of this gem, but came up short. Regardless, we all got a kick out of it and there wasn't a single person who didn't agree with the statement.  It appears that whether your 25, 80 or anywhere in between you feel like life is flying by so fast that you can barely hang on.  Yet, the 80 year old will tell the 25 year old that he or she doesn't know what fast is..."just wait" they'll say.

Clearly, FAST is completely relative.  Yet our careers, family, friends, fitness & Facebook have us peddling so fast we're missing life...real living.  We can't possible juggle all these things and maintain true fulfillment.  At some point we just crash or implode.


I promise this.  If you'll could just focus on one thing, the rest would work itself out.  You would know just what demands on your time are vital and what is fodder.  Focus on God. 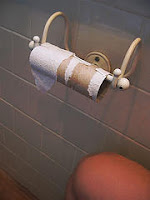 Through Him your life will be centered.  Like the toilet paper holder, He will stay steady so that when you're whirling around at a feverish pace you will have a stable base to rely on.
Most important, when the paper runs out and you've taken your last spin, He'll be there...steady as ever...forever and ever.
Run in Peace, Rest in Grace
Posted by Randy Runswithacross at 1:19 PM