Woke up for my typical Wednesday morning run and fought getting out of bed like crazy.  The temperature was once again below freezing.  Sadly, it had been ten days since my last run.  Oh, must go, must go, Must GO! 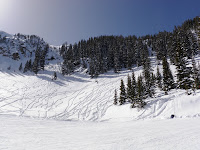 I suppose the ten days off is a bit misleading.  We just returned from skiing in Taos & Santa Fe.  As you might imagine, it was simply beautiful. 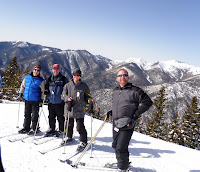 It should be noted that running long distances at a slow pace does not prepare you as well as one might hope for a hard few days on the slopes.  To be positive, this could be considered cross-training and I came home undamaged.
The time off and cross-training did not make these morning miles any easier.  In fact, for the first time in many months, I began to question why I'm doing this.  I don't have anything to prove and I'm sick of the cold weather.  If I hadn't already registered to run a half marathon next week, I think I would have just quit right then and there.

Nevertheless, I was reminded that this down or depressed feeling about my running is quite common.  While I've been a runner for almost 20 years, I have had lengthy periods of time when I didn't run at all or simply went through the motions.  Times when I simply lost my passion for running.

This seemingly seasonal shift can be said of many aspects of my life.  None more important than my faith.  Whether it is my prayer life, time studying the Word, volunteering to help others or worship, I regret there have been periods in my life that I was clearly going through the motions.

It is interesting to note that my faith is strongest when I'm passionate about my training.  I tend to spend much more time growing my relationship with God at a time when I have less time to give to it.  It must be the structure of training that allows me to be more disciplined in my pursuit of God.  Or, more likely, it is my desire to be close to God that inspires me to run.  Whatever it is, it works for me.

So today I once again vow to rekindle my passion for both.  For the both do me good.

Run in Peace, Rest in Grace
Posted by Randy Runswithacross at 1:55 PM

He is not a Hobby

"Many of us have merely added Christ to our lives as another interest in an already busy and otherwise overcrowded schedule."
- By Patrick Morley from Devotions for the Man in the Mirror

Ouch, that hurts. That hits home. As we grow in our faith, we remain vulnerable to slotting God conveniently into our schedule. I find myself doing that all the time. While I encourage everyone to set aside time daily for reading the Bible and personal reflection, we must eliminate the on/off switch.

I started doing something new this week. When I wake up I immediately go to God in prayer. At the end, I simply pray this: God, time for me to get up. I need to get going, but I'm not going without you. You ready to go?

Run in Peace, Rest in Grace
Posted by Randy Runswithacross at 8:49 AM

This was the 22nd Lake Benbrook Half Marathon & 5K. 22nd...who knew? I've run in the area for 18 years or more. How have I missed this race? Sadly, my wife must be correct. When she says..."the girls and I leave for Florida on Thursday..." I say.."Florida? What's in Florida? It would be nice if you gave me a little warning." Her oh so familiar reply..."I told you this a dozen times." So, maybe I've heard of this race before...just didn't register.

The weather was almost downright nasty. This photo is from Weatherbug shortly before the start. 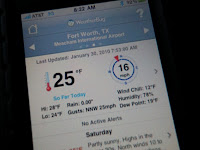 25*F with the wind coming out of the north at 16 mph resulting in a wind chill of 12*F. I say "almost brutal" because there was not any precipitation to tip the scale to officially "brutal". However, one of the volunteers suggested everyone add a layer. He said the wind off the lake "could" make it seem much colder.

I'm a pansy so I stayed in the car until the last minute. Actually, I had the race panic of..."oh man, I missed the start." As I left my car I didn't see a single person. Fortunately, I got there in time to hear the gun and off we went. Next amateur mistake was when I looked around and saw only yellow bibs (5k). 'Maybe I missed the Half start?' I was finally relieved when I saw the course split ahead (5k left/Half right) and knew that this race must have started everyone together.

Ok, time to get in a groove and check back into reality in a few hours. Then...right as we were approaching the first mile marker I saw a few people running back toward me. 'Geeze, this is an out & back race, but how did those guys'....then I saw it. The dreaded low water crossing. 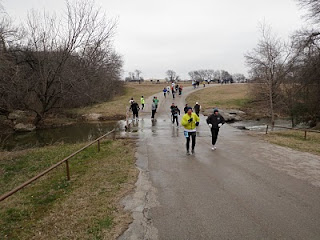 As I approached, I saw people taking the high side and low side with equal failure. It might not look like much, but it was ankle bone deep and too broad to jump. "Guess we're gonna get wet." I call this a two footer since you can't sacrifice one foot to save the other...both are going in and one of them twice. This was a new experience for me. Those that turned back must have been wearing new shoes or couldn't swim...pansies.
Wet, yes...strange sensation. Ok, now this might qualify as "downright brutal" after all. But, even in 25* temps it turned out to be nothing. Zero. Nada. Within a half a mile I didn't notice a thing. 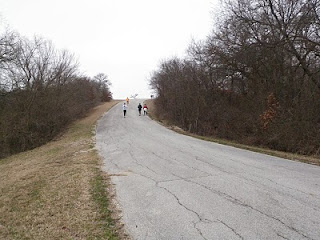 The race runs along the loop road around Lake Benbrook. In this weather and at this time of year, it is desolate. At times it felt like home; on a solo long run just running because that is what we do. The race flyer said the course was rolling hills with one big hill. At about mile 6...the Big Hill loomed around the bend.
Unfortunately, after scaling Mount Benbrook you get to do it again from the other direction after the turn around.
Actually, it wasn't so bad for me. I walked most of it using the excuse that I needed to take some pictures. 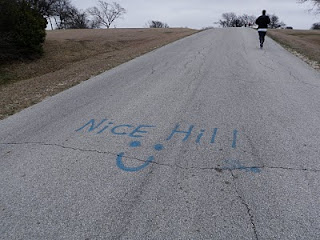 We were treated to three deer running in the open fields shortly thereafter. I tried to take a photo, but they were running a little faster than I was.
Snow flurries! Ok, just a few...this confirms it was cold. We don't get that in Fort Worth. Fortunately, I dressed perfectly (I wore pants for the first time ever...well, I wear pants everyday, but not when running) and never got too warm or too cold. The wind gusts on the out portion were manageable and I wrongfully assumed the back portion would be warmer. Ok, it was cold. Saw several brave souls that I'm sure wished they had worn more gear.
There was a spot along the way that the road had frozen over from drainage. On the first crossing, a fellow runner had stopped and was guiding people to go around it in the grass. The young man had sacrificed his race to help us all be safe. Wish I had seen him later to thank him.
Uneventful the rest of the way. Just a few friendly folks working the aid stations (back of a pick-up). Ok, so, the water was a bit frozen on top, but hey...it was cold. What a great set of volunteers to brave the elements. It reminds me that I need to do more giving to our sport and quit being such a taker.
Back to mile 12 and the water crossing. No hesitation this time. Dang, that water was cold.

My time was actually pretty good for me (2:03.38) considering the water crossing and "photo/walk" sessions. I felt wonderful the whole time. 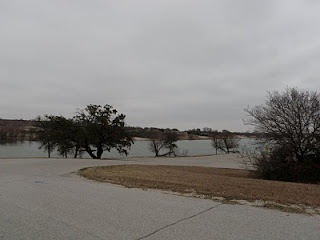 Finisher's medal was small, but at the cost of $35 (late registration) I'm surprised they had one at all. The long sleeve cotton t-shirt is great. Post race chili and nachos was an interesting surprise.
I'd recommend this race to a seasoned runner looking for a tune-up before the Cowtown races. It was perfect for me as I ran this in lieu of another long training run. It would probably be a disappointment for a first time half marathon participant because of the lack of crowd support and minimal bling.
Sorry to be so lengthy.  Just thought this race was off the radar for many and wanted to share.
Run in Peace, Rest in Grace
Randy
Posted by Randy Runswithacross at 11:28 AM